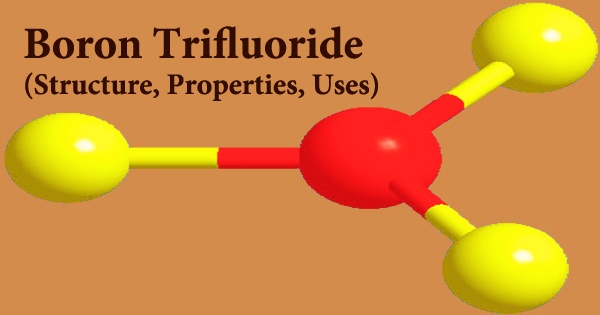 Boron trifluoride (BF3) is an inorganic compound that is a colorless gas with a strong odor. It is poisonous when inhaled; it is soluble in water and slowly hydrolyzes in cold water to release corrosive hydrofluoric acid. In moist air, this pungent colorless toxic gas produces white fumes. It’s a useful Lewis acid and a flexible boron compound building block. It easily dissolves in water and any organic compounds that contain nitrogen or oxygen. Its vapors have a higher density than air. Inhaling the gas irritates the respiratory system, and if the gas comes into contact with the skin in high amounts, it can cause burns.

Long-term exposure to fire or heat can cause violent bursting and rocketing of the containers. A BF3 molecule has a trigonal planar geometry. Its D3h symmetry matches the VSEPR theory’s prediction. Because of its high symmetry, the molecule has no dipole moment. The carbonate anion, CO2−3, is isoelectronic with the molecule. Isomerization, alkylation, polymerization, esterfication, condensation, cyclization, hydration dehydration, sulfonation, desulfurization nitration, halogenation oxidation, and acylation are all catalyzed by boron trifluoride.

It can also be used to make other boron compounds as a flexible building block. The term “electron-deficient” is also used to describe BF3, which is supported by its exothermic reactivity toward Lewis bases. Boron trifluoride is a catalyst in organic synthesis that is often used in soldering fluxes, neutron measurement, and as a fumigant. It’s also used to prevent the oxidation of molten magnesium and its alloys. The length of the B–X bonds (1.30 Å) in the boron trihalides, BX3, is shorter than would be predicted for single bonds, and this shortness could suggest stronger B–X π-bonding in the fluoride.

Boron trifluoride is a colorless, nonflammable gas with a suffocating odor. In damp air, it produces dense acidic fumes. Mild steel, iron, copper-zinc and copper-silicon alloys, and nickel are all used with dry boron trifluoride. The symmetry-allowed overlap of a p orbital on the boron atom with the in-phase combination of three similarly oriented p orbitals on fluorine atoms is a simple explanation. Others point to the ionic structure of the bonds in BF3 as a possible explanation.

Most metallic materials and certain plastics are corroded by moist gas. As a result, the preferred gasketing materials are Kel-F and Teflon. Since boron trifluoride is soluble in mercury, manometers containing mercury should not be used. It is shipped as a nonliquefied compressed gas that decomposes in hot water to produce hydrogen fluoride. Joseph Louis Gay-Lussac and Louis Jacques Thénard discovered boron trifluoride in 1808 while attempting to isolate “fluoric acid” (i.e., hydrofluoric acid) by mixing calcium fluoride with vitrified boric acid. The reaction of boron oxides with hydrogen fluoride produces BF3:

In the United States, boric acid and hydrofluoric acid are combined in a patented method to produce boron trifluoride. With a boiling point of 100.3 °C and a critical temperature of 12.3 °C, anhydrous boron trifluoride can only be preserved as a refrigerated liquid between those levels. Since a refrigeration system failure could cause pressures to rise to the critical pressure of 49.85 bar, storage or transport vessels should be built to withstand internal pressure (4.985 MPa).

Incandescence is caused by reactions with alkali metals or alkaline earth metals (except magnesium). Boron trifluoride (as well as organic complexes like BF3-etherate) is a highly corrosive agent that damages all body tissues. As these compounds come into contact with moisture in the skin or other tissues, they form hydrofluoric acid and fluoroboric acid, which cause serious burns. Stainless steel, monel, and hastelloy are all good metals for handling boron trifluoride.

It corrodes steel, including stainless steel, in the presence of moisture. It has good tolerance to polyamides, polytetrafluoroethylene, polychlorotrifluoroethylene, polyvinylidene fluoride, and polypropylene. This substance isn’t thought to have enough warning properties. Boron trifluoride has not been shown to be carcinogenic or to be toxic to humans’ reproductive or developmental systems. Chronic inhalation of boron trifluoride gas can cause irritation and damage to the lungs.

The boron trihalides, unlike the aluminum and gallium trihalides, are both monomeric. They go through a lot of halide exchange reactions.:

The mixed halides cannot be obtained in pure form due to the ease of this exchange procedure. Boron trifluoride produces poisonous and corrosive gases of fluorine-containing compounds when heated to decomposition or when it comes into contact with water or steam. When heated or exposed to moist air, it decomposes into poisonous and corrosive gases of boric acid and hydrofluoric acid.

Friedel-Crafts alkylation reactions typically use boron trifluoride as a catalyst. It’s also used to catalyze the conversion of ethers to alcohols, esterification reactions, and aromatic compound nitration and sulfonation. BF3 is used as an initiator in many olefin polymerization reactions, along with a proton donor such as water. BF3 is also used in petroleum cracking and desulfurization, as well as to catalyze the isomerization of alkenes and alkanes. As epoxy curing agents, BF3 amine complexes are used.