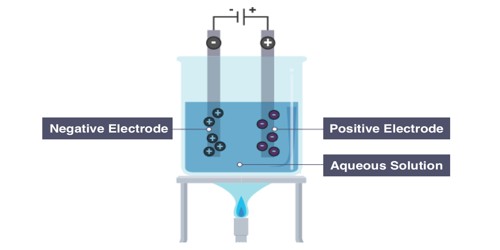 Metals above carbon in the reactivity series (potassium, sodium, lithium, calcium, magnesium, and aluminum) are extracted by electrolysis. To understand the process of electrolysis, let’s first look at one of the most common and simplest electrolytic processes, the electrolysis of water. In this process, water molecules (H2 O) are split to produce both hydrogen (H2) and oxygen (O2) gas. Inside the glass of water, water molecules are being split to produce hydrogen and oxygen gas, which bubbles to the surface. 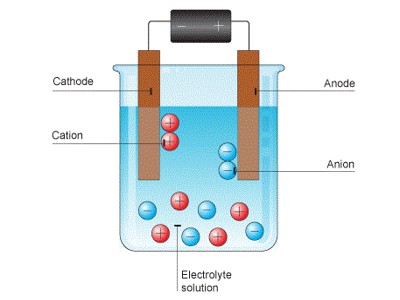 The key process of electrolysis is the interchange of atoms and ions by the removal or addition of electrons to the external circuit. Electrolysis is used in the mining industry to split reactive metals from their ores after they are taken from the ground. Electroplating is also used to plate (cover) things with metal because it costs less than using, for example, solid gold to make jewelry.

Many beauty shops use electrolysis or electrology to remove hair. This is done by “electrocuting” the hair so it splits along its root.

Electrolysis makes the anions (negative ions) go to the anode (positive electrode) and the cations (positive ions) go to the cathode (negative electrode). Oxidation of ions or neutral molecules occurs at the anode, and reduction of ions or neutral molecules occurs at the cathode. So, for example, oxygen would go to the anode and iron would go to the cathode. It is very important commercially as a stage in the separation of elements from naturally occurring sources, such as ores, using an electrolytic cell.