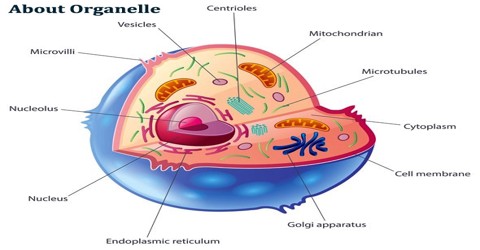 Living things are made of cells, or biological units also referred to as the building blocks of life. Some organisms consist of just one cell, while others are made of trillions of cells. Each one of these cells functions as a tiny factory, with individual parts that work together to keep the cell alive and, in turn, keep the organism going. These parts are called organelles. Organelles are identified by microscopy, and can also be purified by cell fractionation. There are many types of organelles, particularly in eukaryotic cells. While prokaryotes do not possess organelles per se, some do contain protein-based bacterial microcompartments, which are thought to act as primitive organelles. The term “organelle” is basically the same as to say “little organ”. This is interesting because, inside of the cell, the organelle operates on its own, using its own protective layer, and allowing the cell to perform specific functions. Similarly in our human body, our organs work in an interdependent way, and on their own, using each their own protective mechanisms and making sure that our bodies are performing to their most optimal condition.

Structure and Functions of Organelle

The Nucleus is the largest organelle in a cell. It contains a dense structure called the Nucleolus and is surrounded by the Nuclear Envelope, a structure composed of two membranes, seperated by fluid, which contain a number of nuclear pores that can allow relatively large molecules through. The nucleus contains nearly all of the cell’s genetic material. The Nucleolus creates Ribonucleic Acid and Ribosomes, which then travel out of the nucleus, through the nuclear pores, to the cytoplasm where they are involced in Protein Synthesis. The Golgi Apparatus is a stack of membrane bound flattened sacs, and are responsible for the modification of proteins received from the ER. These proteins are then transported in vesicles around the cell. Mitochondria are round double membrane bound organelles responsible for Aerobic Respiration. Their inner membrane is folded inside to form Cristae, which are folded in the Matrix – the central part of a Mitochondrion. During Aerobic Respiration, ATP is produced in the Mitochondria. The Endoplasmic Reticulum (ER) is found near the Nucleas and is made up of a number of flattened sacs called Cisternae, which are continuous with the Nuclear Envelope. The Rough Endoplasmic Reticulum is called so because it has a lot of Ribosomes on its outer surface. The Smooth Endoplasmic Reticulum however, does not have Ribosomes. The Rough transports proteins that are synthesised in the Ribosomes, and the Smooth synthesises Lipids.

Microfilaments are very thin threads made of protein. Like the microtubules, they help the cell keep its shape. Making proteins is a very important job for a cell. Ribosomes are small pieces of RNA found throughout the cytoplasm and on some other organelles. Their only job is to assemble proteins. DNA coding tells them which proteins to make. Prokaryotic cells can have tens of thousands of ribosomes. Eukaryotic cells can have hundreds of thousands, if not millions of them, all making proteins. Ribosomes are small spherical organelles, composed of two subunits, which can be found on the Rough Endoplasmic Reticulum and also in the cytoplasm and in mitochondria, and other places. Ribosomes translate genetic information in the form of mRNA into proteins. Centrioles are microtubules found next to the nucleus of animal cells and some protoctists. They move Chromosomes around by forming fibres called Spindle, during cell division.