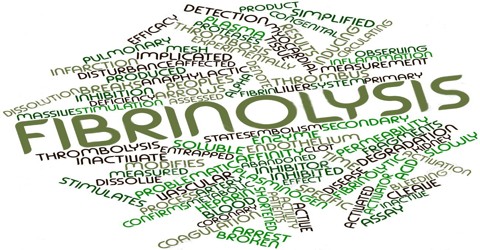 Fibrinolysis is a process that occurs inside the body to break down thrombus (blood clots). This prevents blood clots from remaining in place and growing and allows the body to clear fragments of clots safely to avoid risks such as strokes and damage to the heart that can be caused by big floating clots. This process has two types: primary fibrinolysis and secondary fibrinolysis.

Primary fibrinolysis occurs naturally as the body clears clots that are no longer necessary once the underlying tissue is healed. Secondary fibrinolysis can be induced with medications or occur as the result of stress or disease. In fibrinolysis, a fibrin clot, the product of coagulation, is broken down. Its main enzyme plasmin cuts the fibrin mesh at various places, leading to the production of circulating fragments that are cleared by other proteases or by the kidney and liver.

When blood clots, it forms around a matrix of fibrin, a protein that is released during coagulation. The fibrin creates a framework for blood to clot around for the purpose of sealing a hole or covering a wound. Left in place, however, the clot could lead to the development of problems. In fibrinolysis, an enzyme called plasmin cuts through the fibrin to break the clot apart into smaller pieces that can be expelled by the body.

Fibrin plays an essential role in hemostasis as both the primary product of the coagulation cascade and the ultimate substrate for fibrinolysis. Fibrinolysis efficiency is greatly influenced by clot structure, fibrinogen isoforms and polymorphisms, the rate of thrombin generation, the reactivity of thrombus-associated cells such as platelets, and the overall biochemical environment. Regulation of the fibrinolytic system, like that of the coagulation cascade, is accomplished by a wide array of cofactors, receptors, and inhibitors. Fibrinolytic activity can be generated either on the surface of a fibrin-containing thrombus, or on cells that express profibrinolytic receptors. In a widening spectrum of clinical disorders, acquired and congenital defects in fibrinolysis contribute to disease morbidity, and new assays of global fibrinolysis now have potential predictive value in multiple clinical settings. Here, we summarize the basic elements of the fibrinolytic system, points of interaction with the coagulation pathway, and some recent clinical advances. Fibrinogen, a soluble 340-kDa protein, circulates in whole blood at concentrations of 2–4 mg/mL. It consists of two sets of three distinct disulfide-linked polypeptide chains (Aα, Bβ, and γ), whose synthetic programs are directed by three separate genes on chromosome 4. Thrombin’s major molecular target is fibrinogen, which is converted to fibrin monomers as thrombin removes N-terminal fibrinopeptides A and B. The resulting monomer is a disulfide-linked trinodular protein whose N- and C-termini converge at the E- and D-nodules, respectively. Few congenital disorders of the fibrinolytic system have been documented. Nevertheless, excess levels of PAI and alpha 2-antiplasmin have been implicated in the metabolic syndrome and various other disease states.

However, acquired disturbance of fibrinolysis (Hyperfibrinolysis), is not uncommon. Many trauma patients suffer from an overwhelming activation of tissue factor and thus massive hyperfibrinolysis. Also in other disease states hyperfibrinolysis may occur. It could lead to massive bleeding if not diagnosed and treated early enough.

The fibrinolytic system is closely linked to control of inflammation, and plays a role in disease states associated with inflammation. Plasmin, in addition to lysing fibrin clots, also cleaves the complement system component C3, and fibrin degradation products have some vascular permeability inducing effects. Fibrinolysis is tightly controlled by a series of cofactors, inhibitors, and receptors. Plasmin is the primary fibrinolysin, and is activated from plasminogen by either of two primary serine proteases, tPA and uPA. Where as tPA is synthesized and released by endothelial cells, uPA is produced by monocytes, macrophages, and urinary epithelium. Both activators have exceedingly short half-lives in circulation (4–8 minutes) due to the presence of high concentrations of specific inhibitors, such as plasminogen activator inhibitor-1. Compared to tPA, uPA has lower affinity for plasminogen, does not require fibrin as a cofactor, and, under normal conditions, appears to act mainly in extravascular locations. Both tPA and uPA are cleared by the liver after forming complexes with a low density lipoprotein (LDL)-receptor-like protein. Because plasmin increases activator activity by converting single-chain tPA and uPA to their two-chain counterparts, plasminogen exerts positive feedback on its own activation.