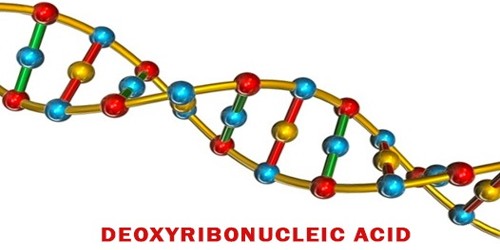 DNA, short for deoxyribonucleic acid, is the molecule that contains the genetic code of organisms. It is a molecule that contains the instructions an organism needs to develop, live and reproduce. This includes animals, plants, protists, archaea, and bacteria. The fundamental units of heredity are genes. DNA is in each cell in the organism and tells cells what proteins to make. Mostly, these proteins are enzymes. DNA is inherited by children from their parents. This is why children share traits with their parents, such as skin, hair and eye color. These instructions are found inside every cell and are passed down from parents to their children. 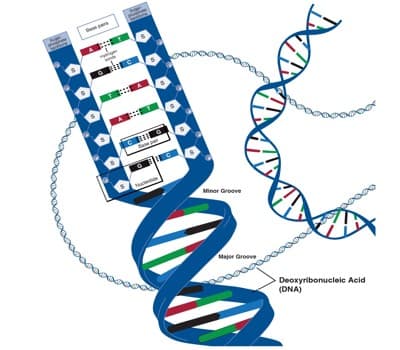 DNA is made up of molecules called nucleotides. It has a double helix shape, which is like a ladder twisted into a spiral. Each step of the ladder is a pair of nucleotides. Each nucleotide contains a phosphate group, a sugar group, and a nitrogen base.

A nucleotide is a molecule made up of:

DNA is made of four types of nucleotide:

Adenine (A) and thymine (T) can pair up because they make two hydrogen bonds, and cytosine (C) and guanine (G) pair up to make three hydrogen bonds. Although the bases are always in fixed pairs, the pairs can come in any order (A-T or T-A; similarly, C-G or G-C). This way, DNA can write ‘codes’ out of the ‘letters’ that are the bases. These codes contain the message that tells the cell what to do.

On chromosomes, the DNA is bound up with proteins called histones to form chromatin. This association takes part in epigenetics and gene regulation. Genes are switched on and off during development and cell activity, and this regulation is the basis of most of the activity which takes place in cells.

When DNA is copied, this is called DNA replication. Briefly, the hydrogen bonds holding together paired bases are broken and the molecule is split in half: the legs of the ladder are separated. This gives two single strands. New strands are formed by matching the bases (A with T and G with C) to make the missing strands.