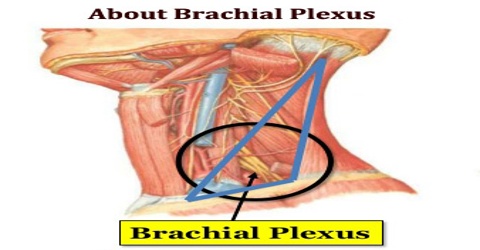 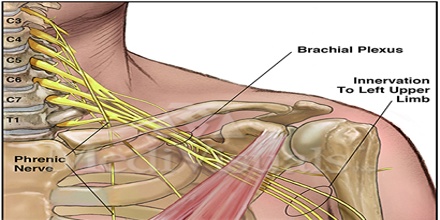 Each trunk splits into a division. Half the divisions globally supply flexor muscles that lift and bend the arm. The others supply the extensor muscles that straighten the arm and bring it down.

The brachial plexus consists of roots, trunks, divisions, cords and terminal branches as it travels from proximal to distal upper limb. The plexus is formed by the anterior rami (divisions) of the cervical spinal nerves C5, C6, C7 and C8, and the first thoracic spinal nerve, T1. Brachial plexus is divided into five roots, three trunks, six divisions, three anterior and three posterior, three cords, and five branches. There are five “terminal” branches and numerous other “pre-terminal” or “collateral” branches, such as the subscapular nerve, the thoracodorsal nerve, and the long thoracic nerve, that leave the plexus at various points along its length. 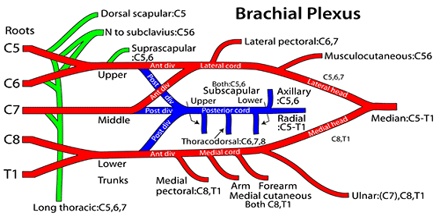 The brachial plexus supplies all of the cutaneous innervation of the upper limb, except for the area of the axilla, which is supplied by the supraclavicular nerve and the dorsal scapula area, which is supplied by cutaneous branches of the dorsal rami. It communicates with the sympathetic trunk via gray rami communicantes, which join the roots of the plexus. They are derived from the middle and inferior cervical sympathetic ganglia and the first thoracic sympathetic ganglion.

Brachial plexus is responsible for cutaneous and muscular innervation of the entire upper limb, with two exceptions: the trapezius muscle innervated by the spinal accessory nerve (CN XI) and an area of skin near the axilla innervated by the intercostobrachial nerve. The brachial plexus communicates through the sympathetic trunk via gray rami communicantes that join the plexus roots.