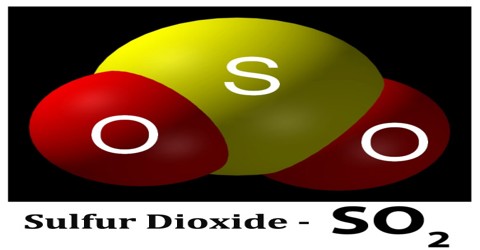 Sulfur Dioxide (SO2) is a colorless, poisonous gas or liquid with a strong odor. It is formed naturally by volcanic activity, and is a waste gas produced by burning coal and oil and by many industrial processes, such as smelting. It used in many industrial processes, especially in the manufacture of sulfuric acid, and as a preservative, disinfectant, and bleach. It is also a hazardous pollutant resulting from burning fossil fuels and refining sulfide-containing ores. 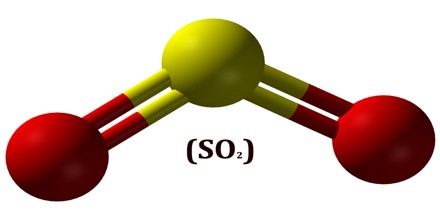 Sulfur dioxide is poisonous and has a strong odor. Sulfur dioxide occurs naturally during volcanic activity and is produced as a waste gas when sulfur-containing materials are heated, such as the burning of coal or oil or the smelting of metal. It is a significant pollutant and currently considered an ecological threat.

At standard atmosphere, it is a toxic gas with a pungent, irritating smell. The triple point is 197.69 K and 1.67 kPa. It is released naturally by volcanic activity.

Sulfur dioxide is a colorless gas with a pungent odor. It is a liquid when under pressure, and it dissolves in water very easily. Sulfur dioxide in the air comes mainly from activities such as the burning of coal and oil at power plants or from copper smelting. In nature, sulfur dioxide can be released to the air from volcanic eruptions. It has two resonance structures which contribute equally to the overall hybrid structure of the molecule. 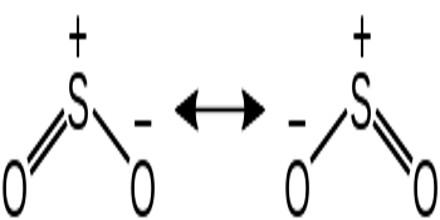 A valence bond theory approach considering just s and p orbitals would describe the bonding in terms of resonance between two resonance structures.

Sulfur dioxide is a bent molecule with polar covalent bonds between one sulfur atom and two oxygen atoms. The chemical formula is SO2. It is a step toward converting sulfur, oxygen, and water into sulfuric acid. Free oxygen molecules combine with sulfur dioxide given off by the oxidation of sulfur-containing materials to form sulfur trioxide (SO3). This molecule is ideally set up to absorb water and become sulfuric acid (H2 SO4), which is also the primary industrial use for sulfur dioxide.

There are many uses of sulphur dioxide. It is used e.g. as a reducing agent in metallurgy, as a coolant in the refrigeration industry, as a disinfectant and bleach, in the preservation of foodstuffs, for dechlorination and as a fumigant. Sulphur dioxide is one of the most important compounds in the chemical industry. 98% of technical SO2 is used in the production of sulphur trioxide as a precursor of sulphuric acid. 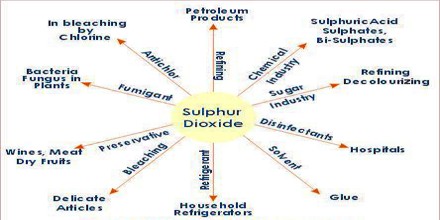 With over 180 million tons of it being manufactured every year, sulfuric acid has applications in nearly every industry. It is actually used in the production of steel, fertilizers, medicines, fuels, batteries, paper, plastics, and in many other applications. It can be also used to disinfect materials, such as wood or straw, and as a fumigating agent to eliminate insects and other pests. In dried fruit, sulfur dioxide inhibits the growth of bacteria, extending the period of freshness.

It is released naturally into the atmosphere from volcanoes and combustion processes. The anthropogenic impact on the environment primarily results from the combustion of sulphurous fossil fuels (e.g. coal, oil, natural gas) in power and heating plants, in industry, in household use and in traffic. The technical product is made from elemental sulphur, pyrite, and sulphide ores of non-ferrous metals, gypsum, and anhydrite and flue gases.