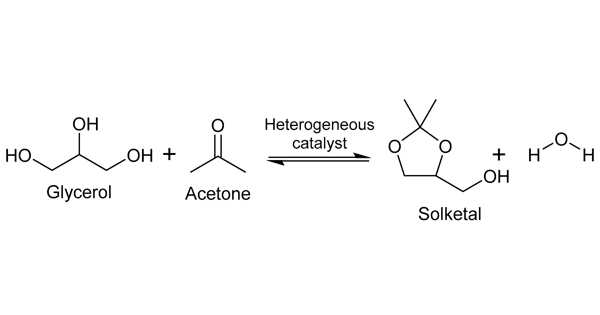 Solketal – a Protected Form of Glycerol

Solketal is a protected form of glycerol that contains an isopropylidene acetal group that connects two adjacent hydroxyl groups. Because solketal has a chiral center on the center carbon of the glycerol backbone, it can be purchased as either the racemate or one of the two enantiomers. It is not harmful to human health or the environment. It is a good solvent for resins and polymers, replacing petroleum-based solvents, and can be used as an additive in (bio)fuels.

Solketal has been widely used in the ester bond formation synthesis of mono-, di-, and triglycerides. The free hydroxyl groups of solketal can be esterified with a carboxylic acid to form the protected monoglyceride, from which the isopropylene group can be removed with an acid catalyst in an aqueous or alcoholic medium. The unprotected diol can then be esterified to form a di- or triglyceride.

Because of the rapid expansion of biodiesel production, glycerol, a major byproduct of transesterification, is also produced at a rapid rate, resulting in an oversupply. As a result of this situation, the price of glycerol has dropped dramatically. As an additive, solketal, a glycerol derivative, can be blended with gasoline or biodiesel.

Solketal production is one of the most cost-effective and promising uses of glycerol. The glycerol is reacted with acetone in the presence of an acid catalyst in this process. Solketal is formed by the reaction of acetone and glycerol. Solketal is a valuable product that is used in the pharmaceutical industry as well as in the polymer industry as a plasticizer. Another important future application is as an additive to improve the fuel properties of biodiesel by reducing viscosity and improving fuel stability.