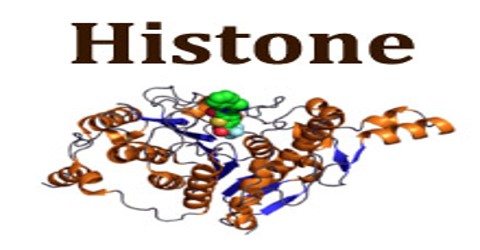 Histone is one of a number of simple proteins (often found in the cell nucleus) containing a high proportion of basic amino acids, are soluble in water, dilute acids, and alkalies, and are not coagulable by heat. It is a protein around, which DNA coils to form chromatin. Without histones, DNA could not organize into chromosomes. Histones are alkaline (basic pH) proteins. They are found inside the nucleus of eukaryotic cells. Their function is to package DNA into structural units called nucleosomes. Histones are the main proteins in chromatin. Chromatin is a combination of DNA and protein which makes up the contents of a cell nucleus. Because DNA wraps around histones, they also play a role in gene regulation.

Structure and Functions of Histone

The four core histones share a common structural motif, termed the histone fold. The structures of the core histones have been used in conjunction with a threading algorithm to identify several other proteins that are likely to contain this fold. The variety of proteins found to contan this motif suggests that the histone fold is widespread and may play a diversity of roles. The high-resolution structures of two classes of proteins containing the histone fold were determined recently. The structure of the histone-like protein HMfB from the hyperthermophilic archaebacterium Methanothermus fervidus has been determined by NMR. The crystal structures of two subunits of Drosophila TFIID, dTAFII42 and dTAFII62, have also been determined, with important implications for the formation of nucleosome-like structures as part of the transcription complex. One of these subunits, dTAFII42, also has a bent central helix. Thus structures are now known for a total of seven proteins with the histone fold. In general, genes that are active have less bound histone, while inactive genes are highly associated with histones during interphase. It also appears that the structure of histones has been evolutionarily conserved, as any deleterious mutations would be severely maladaptive. All histones have a highly positively charged N-terminus with many lysine and arginine residues.

The common nomenclature of histone modifications is:

So H3K4me1 denotes the monomethylation of the 4th residue (a lysine) from the start (i.e., the N-terminal) of the H3 protein.