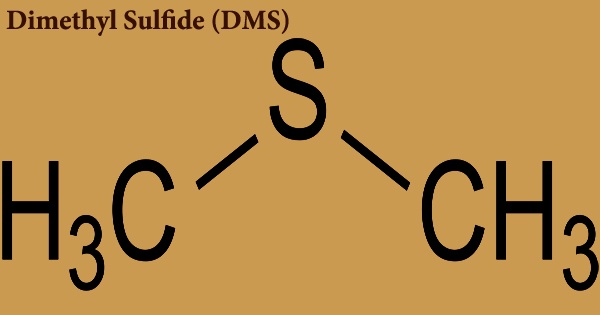 Dimethyl sulfide (DMS), also known as methylthiomethane, is a methyl sulfide with two methyl groups substituting for the sulfur atom. Some marine algae produce it in their natural state. It has the formula (CH3)2S and is an organosulfur chemical. Dimethyl sulfide is a flammable liquid that boils at 37 degrees Celsius (99 degrees Fahrenheit) and has an unpleasant odor. DMS is a clear, colorless to straw-colored liquid with an unpleasant odor. Less thick than water and slightly soluble in water; vapors are heavier than air; flash point less than 0°F

DMS has a cabbage-like stench that reminds me of wild radish. Only at very low levels may it be tolerated as a green vegetable note (0.1 – 3.0 ppm). It can be made from potassium methyl sulfate and potassium sulfide by reacting potassium sulfide with methyl chloride in methanol solution. It’s a bacterial xenobiotic metabolite, a marine metabolite, an EC 3.5.1.4 (amidase) inhibitor, an algal metabolite, and an Escherichia coli metabolite, among other things. It is a component of the odor created when some vegetables, such as maize, cabbage, beetroot, and seafoods, are cooked.

DMS is also a sign of bacterial contamination in malt and beer manufacturing. It is formed by the bacterial metabolism of methanethiol and is a breakdown product of dimethylsulfoniopropionate (DMSP). It has a strong, disagreeable stench that smells like wild radish and cabbage. Only at very low levels may it be tolerated as a green vegetable note (0.1 to 3.0 ppm). The most common biological sulfur molecule released into the atmosphere is DMS. Phytoplankton emits pollution over the oceans.

Sulfur dioxide, dimethyl sulfoxide (DMSO), dimethyl sulfone, methanesulfonic acid, and sulfuric acid are all produced when DMS is oxidized in the marine atmosphere. Sulfuric acid, for example, has the ability to produce new aerosols that act as cloud condensation nuclei. Heat and, in many situations, hydrogen gas are produced during reactions with these materials. When these substances decompose or react with an acid, they can release hydrogen sulfide.

In the absence of a solvent, dimethyl sulfide decomposes dibenzoyl peroxide explosively. At room temperature, the sulfide also decomposes xenon difluoride explosively. Dimethyl sulfide is also formed by marine phytoplankton, and DMS is formed by bacterial cleavage of extracellular DMSP. DMS has been referred to as the “smell of the sea,” while it is more appropriate to state that DMS is a component of the smell of the sea, with other components including chemical derivatives of DMS, such as oxides, and algal pheromones like dictyopterenes.

At 210°C and above, the reaction between dimethyl sulfide and oxygen is explosive. Even with liquid nitrogen cooling, a delayed explosion occurred in a system comprising nitric acid, dimethyl sulfide, and 1, 4-dioxane. DMS is also an odorant generated by kraft pulping mills and a Swern oxidation byproduct. It is normally present at very low levels in healthy people, namely <7nM in blood, <3 nM in urine and 0.13 – 0.65 nM on expired breath.

Excess methyl sulfide is exhaled with carbon dioxide, if it occurs in excess and in free form. Some sources state that DMS has a low olfactory threshold that varies between 0.02 and 0.1 ppm depending on the person, although it has been claimed that the odor attributed to dimethyl sulfide may actually be attributable to di- and polysulfides, as well as thiol impurities, because the odor of dimethyl sulfide is much less disagreeable once it is newly washed with saturated aqueous mercuric chloride the upper respiratory system is moderately irritated by inhalation. Liquid contact with the eyes causes mild discomfort.

Contact with the skin on a regular basis may extract oils and cause discomfort. Nausea and mouth and stomach discomfort result from ingestion. Dimethyl sulfide is also used as a food ingredient to create a savory flavor; however, its concentration is modest in this use. When cooked, beets, asparagus, cabbage, corn, and shellfish release dimethyl sulfide. Dimethyl sulfide (DMS) is made in industry by reacting hydrogen sulfide with excess methanol over an aluminum oxide catalyst.

When exposed to heat or flame, it becomes explosive in the form of vapor; when heated to decomposition, it generates highly hazardous SOx gases and may explode. As a gas odorant, catalyst impregnator, and food flavoring ingredient, dimethyl sulfide is utilized. Although other disulfides or polysulfides are preferred and easier to handle, it has been employed in petroleum refining to pre-sulfide hydrodesulfurization catalysts. It is used as a presulfiding agent in the synthesis of ethylene to prevent the creation of coke and carbon monoxide.

DMS is also utilized in a variety of organic synthesis reactions, such as ozonolysis processes, as a reducing agent. When the hydrotreating catalyst is present in the form of oxides, it is used as a sulfiding agent in the initial feed of the hydrotreater. In the ozonolysis of alkenes, dimethyl sulfide is utilized to reduce the intermediate trioxolane and oxidize it to DMSO.