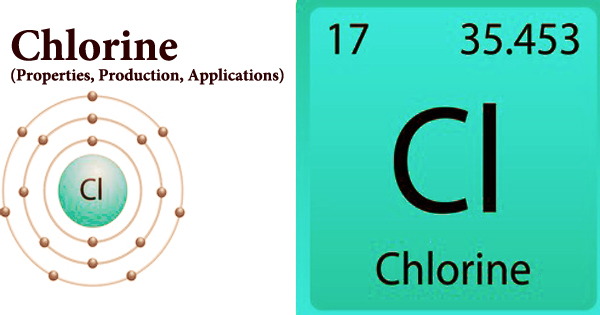 Chlorine (Cl), a chemical element in Group 17 (Group VIIa) of the periodic table, is the second lightest of the halogen elements. It is the second-lightest of the halogens, appearing on the periodic table between fluorine and bromine, and its characteristics are largely midway between them. It’s a toxic greenish-yellow gas that may be found in nature as sodium chloride in saltwater, as well as ashalite (NaCl), carnallite (KCl.MgCl2.6H2O), and sylvite (KCl.MgCl2.6H2O) (KCl). Inhalation is toxic, and it’s only mildly soluble in water. At -35°C and atmospheric pressure, it liquefies. By applying pressure at room temperature, it easily liquefies; density (as a liquid) is 13.0 lb/gal.

It is a highly reactive element and a powerful oxidizer; on the updated Pauling scale, it has the greatest electron affinity and third-highest electronegativity, behind only oxygen and fluorine. It’s made through brine electrolysis, and it’s also used in the Downs process to get sodium. It has a wide range of uses, including water chlorination, bleaching, and the production of a wide range of organic compounds.

Chlorine is a caustic, poisonous, greenish-yellow gas that irritates the eyes and respiratory system. By evaporative cooling, contact with an unconfined liquid can produce frostbite. It does not burn but, like oxygen, it aids in the combustion process. Inhaling low amounts for a long time or inhaling large concentrations for a short time has negative consequences. Because vapors are significantly heavier than air, they settle at low regions.

Chlorine was used extensively in medieval alchemists’ experiments, which typically involved heating chloride salts such as ammonium chloride (sal ammoniac) and sodium chloride (common salt) to produce various chlorine-containing chemical substances such as hydrogen chloride, mercury(II) chloride (corrosive sublimate), and hydrochloric acid (in the form of aqua regia). It is a powerful oxidizing agent that interacts immediately with numerous elements and compounds. Chlorine compounds include the element in the oxidation states 1, 3, 5, and 7.

Johann Rudolf Glauber, a German chemist, created a powerful acid called spirit of salt in 1648 by burning damp salt in a charcoal furnace and condensing the vapors in a receiver. By boiling salt with sulfuric acid, he later obtained the same substance, now known as hydrochloric acid. All chlorine in the Earth’s crust is in the form of ionic chloride compounds, which includes table salt, due to its high reactivity. It is the second most prevalent halogen in the Earth’s crust (after fluorine) and the twenty-first most abundant chemical element.

At 10°C, one liter of water dissolves 3.10 liters of chlorine, but only 1.77 liters at 30°C. Chlorine is utilized in a variety of common items. Chlorine is a yellow-green gas that is heavier than air and has a strong unpleasant odor at room temperature. Under pressure or at freezing temperatures, it can be turned to a liquid. Except for extremely tiny quantities of free chlorine (Cl) in volcanic gases, chlorine is mostly found as chemical compound. Electrolysis is used to commercially generate elemental chlorine from brine, primarily in the chlor-alkali process.

Natural chlorine is made up of two stable isotopes: chlorine-35 (75.53%) and chlorine-37 (24.47%). Elemental chlorine’s great oxidizing potential led to the creation of commercial bleaches and disinfectants, as well as a reagent for many chemical processes. Chlorine has a wide range of applications, including as a disinfectant and purifier, as well as in plastics and polymers, solvents, agrochemicals, and medicines, as well as as an intermediary in the production of other compounds.

Elemental chlorine is very hazardous and toxic to most living creatures when present in large concentrations. Chlorine was initially employed as a poison gas weapon in World War I as a chemical warfare agent. It’s made at a factory by electrolyzing brine with mercury cathode cells or, better yet, a variety of commercially available membrane cells. The anode releases chlorine gas, whereas the cathode releases sodium hydroxide and hydrogen.:

Chlorine irritates the eyes, upper respiratory tract, and lungs significantly. Workers who have been exposed to chlorine gas for a long time have experienced respiratory symptoms such as irritation of the eyes and throat, as well as airflow blockage. Electrolysis of fused sodium chloride, magnesium chloride salt, or hydrochloric acid can also produce Cl. The Weldon and Deacon procedures for producing chlorine have mostly been replaced by the electrolytic process. The Weldon method produces chlorine and manganese chloride by reacting HCl with manganese dioxide ores.

As part of the immune system’s reaction to germs, neutrophils produce small amounts of elemental chlorine by oxidizing chloride to hypochlorite. Chlorine is a smelly suffocating gas that can induce eye, nose, and throat irritation, as well as mouth burning, coughing, choking, nausea, vomiting, disorientation, and respiratory distress. The most common chlorine compound is sodium chloride, which occurs naturally as crystalline rock salt that is frequently discolored by impurities.

In the presence of sunshine, heat, or a spark, a chlorine-hydrogen combination can explode. It may also explode when combined with acetylene or diborane at room temperature, as well as ethylene, fluorine, and many other hydrocarbons when exposed to heat, spark, or catalysts. It has a suffocating odor and inhaling it produces suffocation, chest constriction, tightness in the throat, and edema (fluid filling) of the lungs with prolonged exposure. One part per thousand in the air may kill you in a matter of minutes, while less than one part per million can be tolerated.

Ingestion of chlorinated water resulted in no evidence of carcinogenic activity in male rats, male and female mice, and inconclusive evidence in female rats, according to a National Toxicology Program (NTP) research. Chlorine gas is used to create bleaches and disinfectants, as well as to synthesize other compounds. It’s a strong disinfectant that provides safe drinking water in modest doses. It is used to eliminate dangerous germs in swimming pool water. At room temperature, the gas may be readily liquefied by cooling or applying pressures of a few atmospheres.

Chlorine has a wide range of applications, including as a disinfectant and purifier, as well as in plastics and polymers, solvents, agrochemicals, and medicines, as well as as an intermediary in the production of other compounds. Except for the lighter noble gases, chlorine reacts with virtually all other elements to form chlorides; those of most metals are ionic crystals, while those of semimetals and nonmetals are primarily molecular.

Chlorine is used in huge numbers in industrial operations to make paper, plastics, textiles, dyes, pharmaceuticals, pesticides, solvents, and certain paints, in addition to its usage as an antiseptic in swimming pools and drinking water. Carbonyl chloride (COCl2), also known as phosgene, is a chemical compound made up of chlorine and carbon monoxide that was used as a chemical weapon during World War I. It is primarily used to make isocyanates and polyurethanes, as well as to convert specific oxides into chlorides in metallurgy.

Plastics like neoprene and polyvinyl chloride are made with chlorine (vinyl). Insecticides, pyrotechnics, explosives, and paint pigments are made from it; medicines, chloroform, and chlorofluorocarbons (ClFCs) are made from it; and chlorohydrocarbons are made from it (ClHCs). There are two stable isotopes of chlorine: 35Cl and 37Cl. These are the only two natural isotopes found in significant amounts, with 35Cl accounting for 76% of natural chlorine and 37Cl accounting for the remaining 24%. Chlorine was employed as an accelerator in the daguerreotype process in its elemental form.