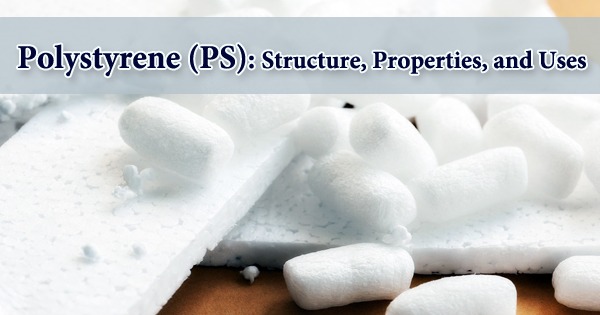 Polystyrene (PS) /ˌpɒliˈstaɪriːn/, is a strong, stiff, beautifully clear synthetic resin made from styrene polymerization. Polystyrene is a rigid, dimensionally stable, chemically resistant to aqueous solutions, and very transparent substance that comes as white powder or beads or as a clear solid. PS is a solid or foamed synthetic aromatic hydrocarbon polymer that is produced from monomer styrene. Polybutadiene is added to impact polystyrene to make it less brittle.

Polystyrene is a thermoplastic polymer that is solid (glassy) at ambient temperature but flows when heated beyond roughly 100 degrees Celsius, its glass transition temperature. When it cools, it returns to its original rigid state. In a continuous polystyrene matrix, polybutadiene is generally distributed in a discrete phase. Polystyrene is one of the most extensively used polymers, with annual manufacturing numbers in the millions of tonnes. Polystyrene can be translucent by nature, but it can also be tinted using colorants. It may be grafted onto rubber particles, ensuring that the phases stick together well.

PS can be found in rigid trays and containers, disposable dining utensils, and foamed cups, plates, and bowls in the foodservice business. It is collecting as litter in the environment, notably along coastlines and rivers, and in the Pacific Ocean, especially in its foam form. Polystyrene is a transparent, glass-like substance made by polymerizing phenylethene (styrene) using benzoyl peroxide as an initiator. Polystyrene is used to manufacture appliances, electronics, car components, toys, gardening pots and equipment, and more when mixed with various colorants, additives, or other polymers.

About room temperature, polystyrene is brittle, softens at 80°C, and is frequently copolymerized. Eduard Simon, a Berlin-based pharmacist, discovered it in 1839. Following the theory of German organic chemist Hermann Staudinger (1881–1965), it was discovered around 80 years later that heating styrol initiates a chain reaction that generates macromolecules. Polystyrene was finally given to the material as a result of this. It has traditionally been employed in capacitors in film form, and it is still competitive in this use.

Polystyrene (PS) is also copolymerized, or mixed with other polymers, to give a variety of essential plastic and rubber goods hardness and stiffness. It’s a long-chain hydrocarbon with alternating carbon centers linked to phenyl groups in chemical terminology (a derivative of benzene). The chemical formula for polystyrene is (C8H8)n, and it comprises the elements carbon and hydrogen. Because the solid is not extremely flexible, it is also utilized for coaxial-cable insulation, but in wound strip or bead form.

Expanded polystyrene (EPS) or extruded polystyrene (XPS) is a foam material manufactured from polystyrene that is prized for its insulating and cushioning qualities. Short-range van der Waals attractions between polymer chains control the material’s characteristics. The cumulative attractive force between the molecules is strong since the molecules are made up of thousands of atoms. The chains can take on a higher degree of confirmation and glide past each other when heated (or deformed at a quick pace, due to a combination of viscoelastic and thermal insulation characteristics). General-purpose and impact polystyrene have a specific gravity of 1.05. For copolymers, it varies; certain specialized grades have a greater cost.

Although the density of the polymer fluctuates somewhat with pressure, it is noncompressible for practical applications. Deflection temperatures, in terms of heat resistance, range from roughly 66 to 99 °C (170 to 215 °F), depending on the formulation. Extruded polystyrene is roughly as strong as unalloyed aluminum, but it’s a lot more flexible and less dense (1.05 g/cm3 vs. 2.70 g/cm3 for aluminum). Ethylbenzene is made by combining ethylene with benzene in the presence of aluminum chloride to produce styrene. This compound’s benzene group is subsequently dehydrogenated to produce phenylethylene, or styrene, a transparent liquid hydrocarbon with the chemical formula CH2=CHC6H5.

Polystyrene is an additional polymer formed when styrene monomers are joined together (polymerization). The useful service temperature of a component is influenced significantly by time and load. The vinyl group’s carbon-carbon link is broken during polymerization, and a new carbon-carbon bond is created, which attaches to the carbon of another styrene monomer in the chain. When devoid of additives and residuals, polystyrene is harmless. It has little nutritional value and does not encourage the growth of fungus or bacteria. Because the freshly created link is stronger than the broken one, depolymerizing polystyrene is difficult.

Foam polystyrene is widely utilized in the manufacture of home and appliance insulation, lightweight protective packaging, surfboards, foodservice and food packaging, car parts, highway and road bank stabilization systems, and other products. Tactility in polystyrene refers to the degree to which the phenyl group in the polymer chain is consistently aligned (organized on one side). Tacticity has a significant impact on the plastic’s characteristics. Polystyrene resins have good dimensional stability, and mold shrinkage is minimal. In humid conditions, the minimal moisture absorption (approximately 0.02%) permits manufactured components to keep their dimensions and strength.

The only economically significant kind of polystyrene is atactic, which has phenyl groups scattered randomly on both sides of the polymer chain. The Food and Drug Administration (FDA) in the United States rigorously controls all food packaging materials, including polystyrene. Glass, metal, paper, and polymers (such as polystyrene) are all used in food packaging and include chemicals that can “migrate” in very small amounts to meals or beverages. Water-white general-purpose polystyrene has a visible light transmittance of around 90%. Modifiers diminish this characteristic, resulting in translucence. The refractive index is around 1.59, and the critical angle is approximately 39.

Every material that comes into touch with food must have enough scientific evidence to show that it is safe to use. Polystyrene is chemically rather inert. While it is impermeable and resistant to many acids and bases, it is rapidly affected by many organic solvents, chlorinated solvents, and aromatic hydrocarbon solvents (e.g. it dissolves fast when exposed to acetone). In all orientations, polystyrene molecules do not have the same optical characteristics. By molecules are orientated in a certain orientation during manufacturing, twofold refraction occurs, and a birefringence effect may be seen when looking at the component via a polarized lens under a polarized light source.

Polystyrene is typically regarded as a non-biodegradable material. Certain species, on the other hand, may break down it, although slowly. Polystyrene (solid and foam) is commonly used in refrigerators, air conditioners, ovens, microwaves, vacuum cleaners, blenders, and other appliances because it is inert (doesn’t react with other materials), cost-effective, and long-lasting. Many automobile parts, such as knobs, instrument panels, trim, energy absorbing door panels, and sound dampening foam, are made of polystyrene (solid and foam). Foam polystyrene is also commonly seen in kid safety seats.

Extruded impact polystyrene sheets are used to make containers, tubs, and trays for a wide range of foods. Wherever clarity is required, biaxially oriented polystyrene film is thermoformed into blister packs, meat trays, container lids, and cookies, candy, pastry, and other food packaging. The insulating characteristics of grey polystyrene foam with graphite are excellent. Another important application of polystyrene is houseware. Polystyrene foodservice packaging insulates better, lasts longer, and is less expensive than alternatives.

For room dividers, shower doors, glazings, and lighting applications, general-purpose polystyrene is extruded either clear or embossed. Household goods such as flower pots, personal care products, and toys are molded from impact polystyrene. In a variety of applications, including as building walls and roofs, refrigerators and freezers, and industrial cold storage facilities, lightweight polystyrene foam provides good thermal insulation. Polystyrene insulation is inert, long-lasting, and water-resistant. Sample collectors, Petri plates, and test tubes are examples of medical uses. Extruded foam board, which is also utilized as a sheeting material, meets all major construction regulations as well as federal and military criteria.