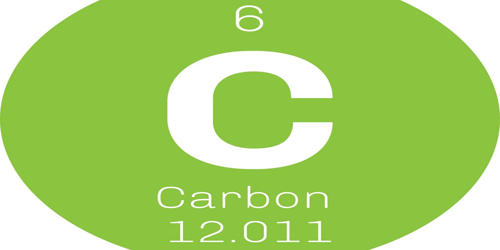 Carbon is a chemical element with symbol C and atomic number 6. It is a nonmetallic chemical element in Group 14 (IVa) of the periodic table. It is nonmetallic and tetravalent-making four electrons available to form covalent chemical bonds. It belongs to group 14 of the periodic table. Three isotopes occur naturally, 12C and 13C being stable, while 14C is a radionuclide, decaying with a half-life of about 5,730 years. Carbon is one of the few elements known since antiquity.

The atoms of carbon can bond together in diverse ways, resulting in various allotropes of carbon. The best-known allotropes are graphite, diamond, and buckminsterfullerene. The physical properties of carbon vary widely with the allotropic form. For example, graphite is opaque and black while the diamond is highly transparent. Graphite is soft enough to form a streak on paper, while diamond is the hardest naturally occurring material known. Pure diamond is the hardest naturally occurring substance known and is a poor conductor of electricity.

Carbon is unique among the elements in its ability to form strongly bonded chains, sealed off by hydrogen atoms. These hydrocarbons, extracted naturally as fossil fuels (coal, oil, and natural gas), are mostly used as fuels. Graphite is used in pencils, to make brushes in electric motors and in furnace linings. Carbon fiber is finding many uses as a very strong, yet lightweight, material. Industrial diamonds are used for cutting rocks and drilling