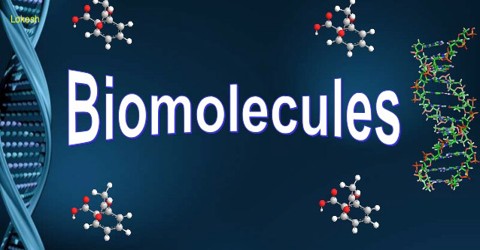 All forms of life are composed of biomolecules only. Biomolecules are organic molecules especially macromolecules like carbohydrates, proteins in living organisms. All living forms bacteria, algae, plant and animals are made of similar macromolecules that are responsible for life. All the carbon compounds we get from living tissues can be called biomolecules.

There are four major types of biomolecules: Carbohydrates – Carbohydrates provide an energy source for the cell and also may play a structural role.  The simplest subunit of a carbohydrate is a monosaccharide.  The structure of the glucose molecule is a good representation of carbohydrate subunits, also called a monomer. Carbohydrates (polysaccharides) are long chains of sugars. Monosaccharides are simple sugars that are composed of 3-7 carbon atoms.

Lipids – Lipids are composed of long hydrocarbon chains (-CH2-).  These molecules hold an incredible amount of energy and are therefore energy storage molecules.  Because of some pretty neat biochemical properties (hydrocarbons are hydrophobic), lipids are the major component of cell membranes.  Cholesterol and other sterols are also types of lipids and are necessary components of cell membranes. Most of the lipids have a polar head and non-polar tail. Fatty acids can be unsaturated and saturated fatty acids. Structure and Functions of Biomolecules

Structure of biomolecule is intricate folded, three-dimensional structure that is formed by protein, RNA, and DNA. The structure of these molecules is in different forms, primary, secondary, tertiary and quaternary structure.

DNA structure is dominated by the well-known double helix formed by Watson-Crick base-pairing of C with G and A with T. This is known as B-form DNA, and is overwhelmingly the most favorable and common state of DNA; its highly specific and stable base-pairing is the basis of reliable genetic information storage. DNA can sometimes occur as single strands or as A-form or Z-form helices, and occasionally in more complex 3D structures such as the crossover at Holliday junctions during DNA replication.

RNA structures contain many stretches of A-form double helix, connected into definite 3D arrangements by single-stranded loops, bulges, and junctions. These complex structures are facilitated by the fact that RNA backbone has less local flexibility than DNA but a large set of distinct conformations, apparently because of both positive and negative interactions of the extra OH on the ribose. Structured RNA molecules can do highly specific binding of other molecules and can themselves be recognized specifically; in addition, they can perform enzymatic catalysis and colleagues.

Carbohydrates provide the body with source of fuel and energy, it aids in proper functioning of our brain, heart and nervous, digestive and immune system. Deficiency of carbohydrates in the diet causes fatigue, poor mental function.

Each protein in the body has specific functions, some proteins provide structural support, help in body movement, and also defense against germs and infections. Proteins can be antibodies, hormonal, enzymes and contractile proteins.

Lipids, the primary purpose of lipids in body are energy storage. Structural membranes are composed of lipids which form a barrier and controls flow of material in and out of the cell. Lipid hormones, like sterols, help in mediating communication between cells.

Nucleic Acids are the DNA and RNA, they carry genetic information in the cell. They also help in synthesis of proteins, through the process of translation and transcription.