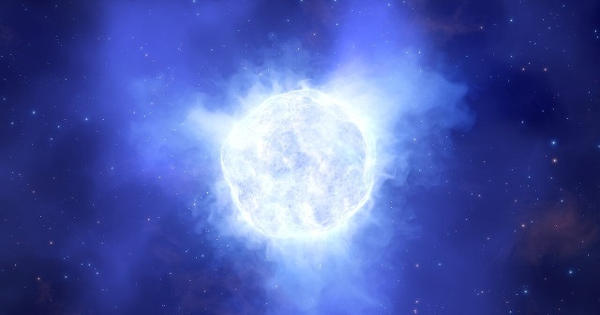 S Doradus is a blue hypergiant star found in the Large Magellanic Cloud. Its temperature can fall to lower than 7,000 degrees Kelvin in big eruptions. It is located 160,000 light-years away and is one of the brightest stars in the Large Magellanic Cloud (LMC), a satellite of the Milky Way. It is one of the most luminous stars known, radiating more than 1,000,000 times as much energy as the Sun.

S Dor was observed many times over the coming decades. In 1924, it was described as “P Cygni class” and recorded at photographic magnitude 9.5. In 1925, its absolute magnitude was estimated at −8.9. In 1933 it was listed as a 9th magnitude Beq star with bright hydrogen lines. It was the most luminous star known at that time.

S Doradus can be more than a million times brighter than our Sun and 380 times larger in these eruptions. It is a luminous blue variable and one of the most luminous stars known, having a luminosity varying widely above and below 1,000,000 times the luminosity of the Sun, but so far away that it is invisible to the naked eye.

S Doradus is the brightest member of the open cluster NGC 1910, also known as the LH41 stellar association, visible in binoculars as a bright condensation within the main bar of the LMC. The color of S Doradus changes as its brightness varies, being bluest when the star is faintest. This is within the N119 emission nebula, which has a distinctive spiral shape. At the same time, the spectrum shows dramatic changes. It is one of the visually brightest individual stars in the LMC, at some times the brightest.

S Doradus variables (LBVs) show distinct quiescent and outburst states. The temperature of an LBV is difficult to determine because the spectra are so peculiar and the standard color calibrations don’t apply, so the luminosity changes associated with brightness variations cannot be calculated accurately. During the quiescent phase, LBVs lie along with a diagonal band in the H–R diagram called the S Doradus Instability Strip, with the more luminous examples having hotter temperatures. Within the margins of error, it has often been assumed that the luminosity stays constant during all LBV outbursts. This is likely if the outburst consists only of an opaque stellar wind forming a pseudo-photosphere to mimic a larger cooler star.