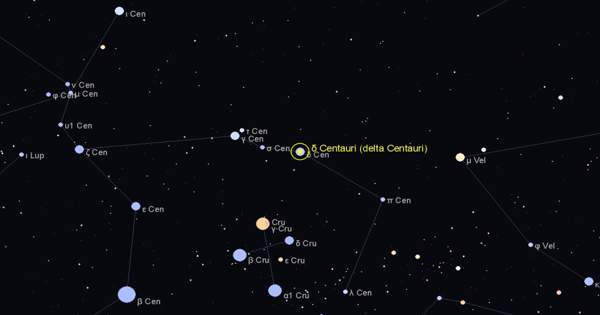 Delta Centauri – a star in the southern constellation of Centaurus

Delta Centauri has an apparent magnitude of +2.52 mag and is assigned to the spectral class B2 IVne. δ Centauri is a shell star with a distinct spectrum caused by material thrown off into a disk by the star’s rapid rotation. It is also a variable star, with a magnitude ranging from +2.51 to +2.65. It has been classified as a variable of the γ Cassiopeiae type.

This star’s stellar classification is B2Vne, indicating that it is a B-type main-sequence star. N. Houk discovered a class of B2 IVne in 1979, with the luminosity class IV indicating that this could be a subgiant star that has exhausted the hydrogen at its core and begun to evolve away from the main sequence.

The star is rapidly spinning, and the resulting Doppler effect results in broad absorption lines in its spectrum, as indicated by the ‘n.’ The suffix ‘e’ indicates that this is a classical Be star, a type of hot star that has not yet evolved into a supergiant and is surrounded by circumstellar gas. The presence of this gas causes an excess of infrared emission, as well as emission lines in the star’s spectrum. The majority of it is concentrated near the equator, forming a disk.

Some of the variation in this star may be explained if it is a binary star system. This proposed secondary star would have to be 4–7 times the mass of the Sun and orbit for at least 4.6 years at a minimum separation of 6.9 Astronomical Units. δ Centauri has a common proper motion with the nearby stars HD 105382 and HD 105383, suggesting that they could form a small cluster or a triple star system. It is a member of the Lower-Centaurus Crux sub-group in the Scorpius-Centaurus OB association, which is the closest such association of co-moving massive stars to the Sun.