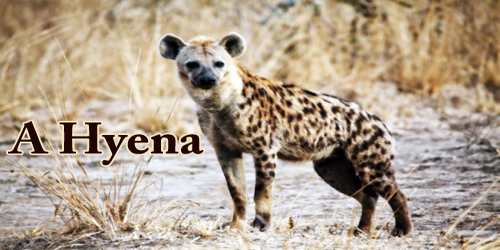 A Hyena or hyaena (from Ancient Greek ὕαινα, hýaina), any of three species of coarse-furred, doglike carnivores found in Asia and Africa and noted for their scavenging habits. Hyenas have long forelegs and a powerful neck and shoulders for dismembering and carrying prey; they are feliform carnivoran mammals of the family Hyaenidae /haɪˈɛnɪdiː/. Hyenas are tireless trotters with excellent sight, hearing, and smell for locating carrion, and they are proficient hunters as well. All hyenas are more or less nocturnal. There are many misconceptions about hyenas. They aren’t just scavengers. Not all of them laugh. They aren’t wild dogs.

Though many people compare hyenas to dogs, they are actually much more like cats. In fact, they are members of the suborder Feliformia, which is a classification for cat-like carnivores, according to the Integrated Taxonomic Information System (ITIS). There are four species in the hyena family, and they vary in size. 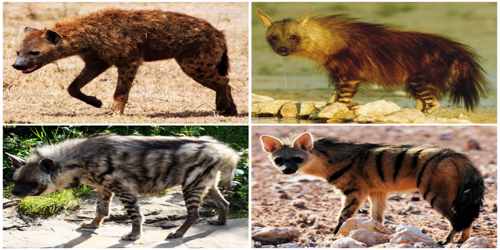 The spotted hyena’s coat is sandy, yellowish or gray, according to the Animal Diversity Web (ADW). It has dark brown or black spots over most of the body.

Brown hyena – Brown hyenas are the second largest, ranging from 51 to 63 inches (130 to 160 cm) long and weighing 75 to 160 lbs. (34 to 72.6 kg), according to ADW. Brown hyenas can be distinguished from other hyenas by the long, shaggy hair, which is dark brown or black on the body and tan on the shoulders and neck. The hair on the neck grows to about 12 inches (30.5 cm), in contrast to the short hair on the legs, face, and ears. The tail is short and bushy. The forelegs, which are horizontally striped, are much longer and more massively built than the hind legs, giving the brown hyena the appearance of always climbing a hill.

Aardwolf – Aardwolves are the smallest species of hyena. They weigh from 17.6 to 30.8 lbs. (8 to 14 kg), and their length ranges from 33 to 41 inches (85 to 105 cm), and about one-fourth of that is the tail, according to ADW. Aardwolves resemble striped hyenas, with similar fur texture and color.

Generally, hyenas are known to drive off larger predators, like lions, from their kills, despite having a reputation in popular culture for being cowardly. Hyenas are primarily nocturnal animals, but sometimes venture from their lairs in the early-morning hours. With the exception of the highly social spotted hyena, hyenas are generally not gregarious animals, though they may live in family groups and congregate at kills.

Intelligent, curious, and opportunistic in matters of diet, hyenas frequently come into contact with humans. The spotted, or laughing, hyena (Crocuta crocuta) is the largest species and will burglarize food stores, steal livestock, occasionally kill people, and consume wastes habits for which they are usually despised, even by the Masai, who leave out their dead for hyenas. Even so, hyena body parts are sought for traditional tokens and potions made to cure barrenness, grant wisdom, and enable the blind to find their way around. Brown hyenas (Parahyaena brunnea or sometimes Hyaena brunnea) are blamed for many livestock deaths that they probably do not cause. Similarly, from North Africa eastward to India, striped hyenas (H. hyaena) are blamed when small children disappear and for supposedly attacking small livestock and digging up graves. In consequence, some populations have been persecuted nearly to extinction. All three species are in decline outside protected areas.

Where hyenas live depends on their type. Brown hyenas have a very limited range and live only in Southern Africa, including the Kalahari and Namib deserts. They are usually found between the Angola-Namibia border and the Orange River in South Africa. There are two distinct populations of aardwolves. One subspecies lives in southern Zambia, Angola, and Mozambique, as well as northeastern Uganda and Somalia. The other subspecies extends into central Tanzania, Ethiopia, Sudan, and Egypt. Spotted hyenas have a little bit larger range and live south of the Sahara Desert. They occur throughout sub-Saharan Africa and are the most numerous large predators in the Serengeti. The striped hyena has the largest range of all. It lives in the north and northeast Africa, the Middle East, and Asia, all the way to southern Siberia.

Hyenas can adapt to almost any habitat and are found in grasslands, woodlands, savannas, forest edges, sub-deserts, and mountains as high up as 13,000 feet (3962.4 m), according to the National Wildlife Foundation.

Order Carnivora branched into dog and cat lineages 50 million years ago; hyenas arose from the cat group. Thus, although hyenas look like dogs, they are actually more closely related to cats. Family Hyaenidae diverged about 30 million years ago. Early hyaenids did not all have bone-crushing molars; those were probably a recent development as some hyenas exploited large carcasses left by saber-toothed cats. Hyaenidae also includes the aardwolf, which looks like a small striped hyena. It has a specialized diet of insects and belongs to a subfamily separate from hyenas.