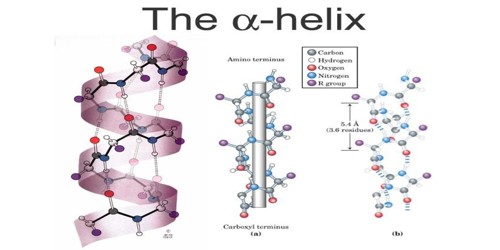 An alpha helix is created by alternating groups of atoms. It is a common element of protein secondary structure, formed when amino acids “wind up” to form a right-handed helix where the side-chains point out from the central coil. There is a carbonyl group, created by a carbon atom double-bonded to an oxygen atom, and an amine group, created by a nitrogen atom bonded to a hydrogen atom. Among types of local structure in proteins, the α-helix is the most extreme and the most predictable from a sequence, as well as the most prevalent. 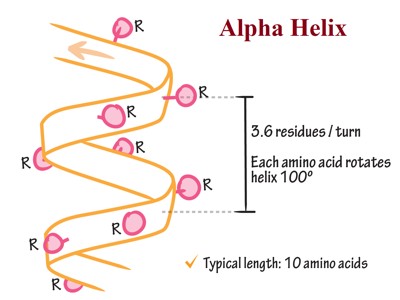 Each section containing one of each of these groups is called a residue, a general term for a small part of a molecule. Each amine group forms a hydrogen bond with the carbonyl group four residues earlier. This tendency is called the helix propensity, with proline and glycine having the least propensity of appearing in a helix. A prion is a protein that causes disease by changing the shape of another protein. It does this by changing some of the alpha-helices, which are more common in normal cells, to beta sheets, which are more common in prions. The side chain of amino acids is projected outward from the outer helical surface. The alpha helix consists of 3.6 residues per turn. All hydrogen bonds face in the same direction. If two or more alpha-helices come together, they become a tertiary structure. (Ex. Five alpha-helices arranged into a barrel shape). Some amino acid residues in a peptide sequence remote α-helical assembly.