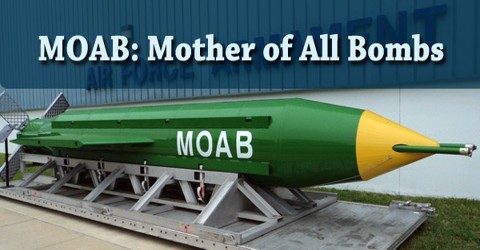 The “Mother of All Bombs,” (or MOAB) is officially known as the GBU-43/B Massive Ordnance Air Blast, is said to be the most powerful non-nuclear weapon in America’s arsenal.

It was reportedly first publicly tested in the days leading up to the 2003 invasion of Iraq in order to win a “psychological” war to deter Saddam Hussein. It weighs in at roughly 10,000 kilograms, is 10 metres long and one metre wide and packs 8,000 kilograms of explosives — in comparison, the average weight of most deployed conventional bombs is roughly 250 kilograms.

To be delivered, it must be carried in a cargo plane, like the MC-130 used, and sucked out of the back of the cabin hold on a pallet via a massive parachute before being guided by satellite, with remarkable accuracy, to its target.

The MOAB’s massive size, in addition to its powerful thermobaric qualities that cause devastating surface destruction, are said by analysts to be two of the main reasons it has not previously been used on the battlefield. The bomb was reportedly transported to Iraq in the early years of the conflict, but never used. The concept behind the MOAB was first developed in the Vietnam War through the BLU-82B/C-130 weapon system, nicknamed the “Daisy Cutter.” That weighed 15,000 pounds and, with a huge blast radius, was used to clear jungles. In addition, it was a psychological weapon, in that the loud sound and huge flash helped create “shock and awe” in the enemy. It was first tested back in 2003. MOAB is designed for such a situation—it explodes in the air, which creates air pressure that can make tunnels and other structures collapse.  It can be used at the start of an offensive to soften up the enemy, weakening both its infrastructure and morale.

Where does it use?

American forces dropped the GBU-43/B Massive Ordnance Air Blast (MOAB) bomb on an ISIS cave complex in Nangarhar Province, Afghanistan, early in the morning local time on April 13, 2017. GBU-43/B, also nicknamed the Mother Of All Bombs with the same acronym as above, was designed to intimidate, as part of the original “Shock and awe” campaign in the 2003 Iraq War. The weapon was never used in that conflict, but it was developed during the same period. The bomb, dropped at 7pm local time (4pm UK time) that day in Afghanistan, was operated by an Air Force Special Operations Command. It was deployed by an MC-130 aircraft to target ISIS and extremists.

Structure and Function of MOAB

The MOAB device bears a charge of 18,700 lbs (8500 kg), composed mostly of H6, which is itself made of RDX. H6 is a standard-issue plastic explosive used by the American military for general-purpose bombs. RDX is a WWII-era plastic explosive, and one of the principal ingredients in Semtex. It’s very stable under normal handling, refusing to explode without a detonator — even unresponsive to small arms fire. While the MOAB was definitely designed to accomplish its goals with a mammoth pressure wave, it is neither a thermobaric weapon nor a fuel-air explosive (FAE). FAEs and thermobaric weapons are conceptually similar to each other as well as the MOAB, because they all use the combination of a shock wave and igniting the volume behind it, but they’re both different from a device like this. The bomb is built by the Alabama-based aeronautics company Dynetics and weighs 9,525 kilograms (21,000 pounds), measures 9,15 meters (30 feet) and contains around 8,165 kilograms (18,000 pounds) of tritonal, a mixture of the explosive material TNT and aluminum powder. The MOAB is considered the successor to the BLU-82 Daisy Cutter, which was developed during Vietnam for instantly clearing forests so helicopters could land. The last of the BLU-82’s were used by 2008, which is why the MOAB was developed to replace them. MOAB is the most powerful non-nuclear bomb in the American arsenal, but not necessarily the most powerful in the world. The Russians have a FOAB, their “Father of All Bombs.” We think the FOAB is a thermobaric weapon, but its capabilities aren’t well known and it hasn’t been independently verified. The Russians claim it to be four times larger than the MOAB. Just for a sense of scale, both of these massive weapons pale in comparison to even small nuclear weapons. MOAB is a 22,600-pound bomb with a blast yield equivalent to 11 tons of TNT. The Russian device is supposedly 44 tons of TNT-equivalent. The first nuclear weapon we dropped weighed something like 9,700 pounds, but had a blast yield of 15 kilotons. And beyond all these, there’s the Tsar Bomba: the most powerful nuclear device ever tested by mankind. This is a weapon confined to the realm of rhetoric even by madmen.