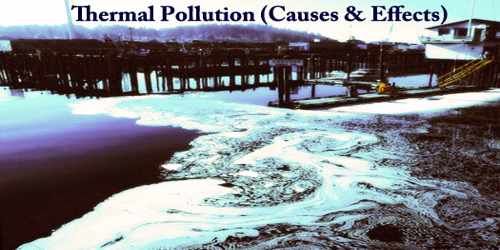 Thermal Pollution, sometimes called “thermal enrichment,” is defined as a sudden increase or decrease in temperature of a natural body of water which may be ocean, lake, river or pond by human influence. This normally occurs when a plant or facility takes in water from a natural resource and puts it back with an altered temperature. Usually, these facilities use it as a cooling method for their machinery or to help better produce their products.

Typically, the man-made process that generates the heat that warms the body of water is electricity production at a power plant. As the power plant operates, massive amounts of heat are produced to boil water into steam, which is then forced through pipes in order to spin the turbine that produces electricity. The heat then must be removed from the plant, often by pumping the heated water into a nearby body of water. Depending on the surrounding environment, this thermal pollution can either be good or bad.

When the water used as a coolant is returned to the natural environment at a higher temperature, the sudden change in temperature decreases oxygen supply and affects ecosystem composition. Fish and other organisms adapted to a particular temperature range can be killed by an abrupt change in water temperature (either a rapid increase or decrease) known as “thermal shock.”

Urban runoff stormwater discharged to surface waters from roads and parking lots can also be a source of elevated water temperatures.

However, thermal pollution can be beneficial to some species. Bacteria and algae tend to benefit from excess heat. Some larger animals also benefit from the warmer water. In Florida, manatees spend the winter near power plants, where the cooling water they use warms up the shallow saltwater.  On balance, thermal pollution is a negative force for many reasons.

The Effects of Thermal Pollution –

The effects of thermal pollution are diverse, but in short, thermal pollution damages water ecosystems and reduces animal populations. Plant species, algae, bacteria, and multi-celled animals all respond differently to significant temperature changes. Organisms that cannot adapt can die of various causes or can be forced out of the area. Reproductive problems can further reduce the diversity of life in the polluted area.

The effects of thermal pollution on ecosystems, however, greatly outweigh the benefits that industries have by participating in the act.

Releases of unnaturally cold water from reservoirs can dramatically change the fish and macroinvertebrate fauna of rivers, and reduce river productivity. In Australia, where many rivers have warmer temperature regimes, native fish species have been eliminated, and macroinvertebrate fauna have been drastically altered. This may be mitigated by designing the dam to release warmer surface waters instead of the colder water at the bottom of the reservoir.

The most important thing to consider is that the effect of thermal pollution greatly outweighs the human need for it to be done. Plants and industries have been able to find successful ways around thermal pollution, but many of them are not practicing it because it’s simply easier to work from the traditional model. If we want to promote the thriving environment that surrounds marine biology, then the attitude around thermal pollution needs to take a drastic turn. By being aware of the causes and effects, we can have a significant impact on how these plants choose to operate and we can opt to make the change.