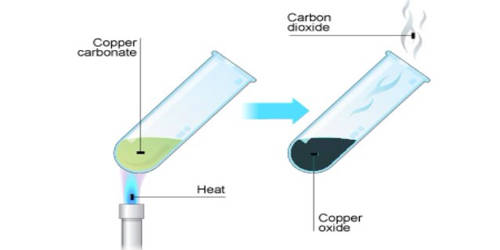 Thermal composition, or thermolysis, is a chemical decomposition caused by heat. It is the breakdown of molecules by the action of heat. It is a process of burning out the organic components such as binders and dispersants. The decomposition temperature of a substance is the temperature at which the substance chemically decomposes. Incomplete binder removal and uncontrolled thermolysis may introduce membrane defects. The reaction is usually endothermic as heat is required to break chemical bonds in the compound undergoing decomposition. The term pyrolysis is often used in place of thermolysis when organic compounds are decomposed at high temperatures. If decomposition is sufficiently exothermic, a positive feedback loop is created producing thermal runaway and possibly an explosion or other chemical reactions. In a combination reaction, a substance is formed as a result of chemical combination, while in a decomposition reaction, the substance breaks into new substances. If the reaction is exothermic, the reaction proceeds spontaneously after initiation, which sometimes causes an explosion.