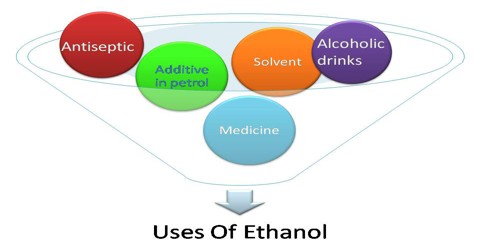 Ethanol is an alcohol obtained from the fermentation of sugars and starches or by chemical synthesis. It is the intoxicating ingredient of alcoholic beverages, and is also used as a solvent, in explosives, and as an additive to or replacement for petroleum-based fuels. Also called ethyl alcohol, grain alcohol. It’s chemical formula: C 2 H 6 O. It is an addictive psychoactive drug (indeed one of the oldest and most common recreational drugs), causing a characteristic intoxication (“drunkenness”) and neurotoxicity when consumed in sufficient quantities. It is widely used as a solvent, as fuel, and as a feedstock for synthesis of other chemicals; as well as in many other minor uses.

The term “alcohol” now refers to a wider class of substances in chemistry nomenclature, but in common parlance it remains the name of ethanol. The Oxford English Dictionary claims that it is a medieval loan from Arabic al-kuḥl, a powdered ore of antimony used since aniquity as a cosmetic, and retained that meaning in Middle Latin. Ethanol is used in medical wipes and most common antibacterial hand sanitizer gels as an antiseptic. Ethanol kills organisms by denaturing their proteins and dissolving their lipids and is effective against most bacteria and fungi, and many viruses. However, ethanol is ineffective against bacterial spores. Ethanol is present in over 700 liquid preparations of medicine including acetaminophen, iron supplements, ranitidine, furosemide, mannitol, phenobarbital, trimethoprim/sulfamethoxazole and over-the-counter cough medicine.

The alcohol that we drink is simply ethanol.

It is also used as a fuel. It burns in air to give carbon dioxide and water and can be used in combination with gasoline (petrol).

Mixture of petrol and ethanol is defined as gasohol with 10-20% ethanol.

The largest single use of ethanol is as an engine fuel and fuel additive. It has been used as rocket fuel and is currently in lightweight rocket-powered racing aircraft.

Ethanol alcohol is the alcohol found in alcoholic drinks such as beer, brandy, or whiskey. It is made from the fermentation or chemical breakdown of sugars by yeasts. It is made from plants and grains such as corn, wheat, barley, and the likes. Ethanol can be produced by milling the grains and then fermenting them with yeast. During the fermentation process, the starches of the grains are turned into alcohol. Then, there is also a distillation process that happens afterwards.

Ethanol is very soluble in water; it is the ideal solvent for different products such as perfumes, deodorants, hair sprays, and industrial items such as lacquers, varnishes and paints. Using it as a solvent is very popular because it is relatively safe, especially for products that we use everyday. Ethyl alcohol is used as a solvent so that active ingredients which do not dissolve in water can be softened and liquified. The alcohol also prevents oily and watery layers from separating by creating an emulsion. Ethanol is added to gasoline as mandated by the EPA to lower carbon emissions to make running of such engines more eco-friendly. Ethanol is classified as a teratogen. According to the CDC, alcohol consumption by women of child-bearing age who are not using birth control increases the risk of fetal alcohol syndrome. The CDC currently recommends complete abstinence from alcoholic beverages. The cardioprotective effect alcohol (ethanol) may not be restricted to red wine.  Some research studies have shown that moderate amounts of all types of alcohol benefit your heart, not just alcohol found in red wine. However, more research is needed. Moderate consumption of alcohol may raise HDL, reduce the formation of blood clots, and help prevent artery damage due to low density lipoprotein (LDL), or “bad” cholesterol. Ethanol-blended fuels left untreated can start “phasing.” Phase separation is when ethanol in the fuel absorbs too much water, and separates from gasoline by dropping to the bottom of the tank since the ethanol and water mixture that results from phase separation is heavier than gasoline. Water-ethanol solutions can damage fuel systems and engines, and the system will need to get flushed to prevent further damage. Once phase separation has occurred, no additive can reverse it, and the fuel tank will require draining. If the fuel and ethanol have completely phase-separated, the fuel in the tank will be unusable and must be drained. Mechanics offer ‘pump-out’ services to drain and flush the fuel system.

Ethanol’s rewarding and reinforcing (i.e., addictive) properties are mediated through its effects on dopamine neurons in the mesolimbic reward pathway, which connects the ventral tegmental area to the nucleus accumbens (NAcc). One of ethanol’s primary effects is the allosteric inhibition of NMDA receptors and facilitation of GABAA receptors, e.g., enhanced GABAA receptor-mediated chloride flux through allosteric regulation of the receptor. At high doses, ethanol inhibits most ligand gated ion channels and voltage gated ion channels in neurons as well.