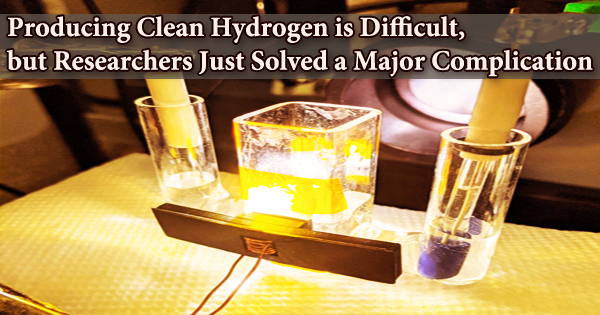 Researchers have been looking for ways to harness solar radiation to create the fundamental process for creating hydrogen as a clean energy source, splitting water molecules to make hydrogen and oxygen, for decades. However, such attempts have often failed since doing it effectively was too expensive, and attempting to do it cheaply resulted in subpar results.

Researchers at The University of Texas at Austin have discovered a low-cost method of solving one side of the equation by effectively splitting oxygen molecules from water using sunlight. The discovery, which was just published in Nature Communications, is a step toward broader use of hydrogen as a crucial component of our energy infrastructure.

Researchers have been looking at the potential of utilizing solar energy to produce hydrogen since the 1970s. However, the difficulties to discover materials with the right mix of characteristics for a device that can efficiently execute the critical chemical processes has prevented it from becoming a widely used technique.

“You need materials that are good at absorbing sunlight and, at the same time, don’t degrade while the water-splitting reactions take place,” said Edward Yu, a professor in the Cockrell School’s Department of Electrical and Computer Engineering.

“It turns out that materials that absorb light well are unstable at the conditions necessary for the water-splitting process, whereas materials that are stable are poor light absorbers. These competing needs force you to make an unavoidable choice, but this conflict may be overcome by integrating various materials into a single device, one that effectively absorbs sunlight, such as silicon, and another that offers high stability, such as silicon dioxide.”

This innovation was made possible by a low-cost way of generating electrically conductive channels through a thick silicon dioxide layer that can be scaled up to large production quantities. Yu and his colleagues employed a technology that was initially used in the production of semiconductor electronic chips to get there.

The devices can efficiently oxidize water to produce oxygen molecules while also producing hydrogen at a separate electrode when exposed by sunlight, and they have excellent stability during lengthy operation. Because the processes used to make these devices are standard in semiconductor electronics manufacturing, they should be simple to scale up for mass production.

To commercialize the invention, the team has submitted a provisional patent application. Improving hydrogen production is critical to its development as a viable fuel source. The majority of hydrogen is produced today by heating steam and methane, however this relies significantly on fossil fuels and emits carbon dioxide.

There is a drive for “green hydrogen,” which generates hydrogen in a more ecologically responsible manner. And one of the most important aspects of that work is to simplify the water-splitting process.

Hydrogen has the potential to become a valuable renewable resource with certain distinct characteristics. It already plays a key part in a variety of industrial processes, and it is beginning to make an appearance in the automobile sector.

Long-haul transportation might benefit from fuel cell batteries, and hydrogen technology could be a boon to energy storage, allowing for the storage of extra wind and solar energy when the conditions are right. By boosting the reaction rate, the team hopes to enhance the effectiveness of the oxygen part of water splitting in the future. Moving on to the other half of the equation is the researchers’ next significant hurdle.

“We were able to address the oxygen side of the reaction first, which is the more challenging part,” Yu said, “but you need to perform both the hydrogen and oxygen evolution reactions to completely split the water molecules, so that’s why our next step is to look at applying these ideas to make devices for the hydrogen portion of the reaction.”

The National Science Foundation’s Directorate for Engineering and the Materials Research Science and Engineering Centers (MRSEC) program sponsored this study. Yu collaborated on the study alongside Soonil Lee and Alex De Palma of UT Austin, as well as Li Ji, a professor at Fudan University in China.