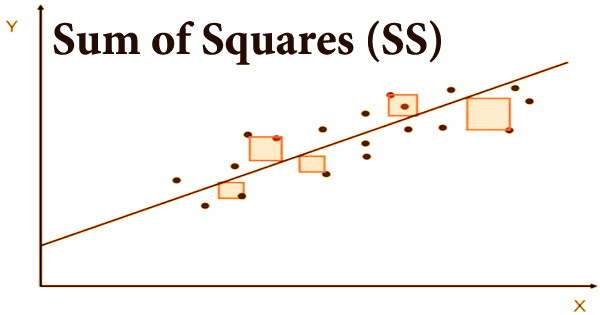 The sum of squares (SS) is a statistic that measures how far individual measurements deviate from the mean. It is a statistical technique that is used in regression analysis to determine the dispersion of data as well as how well the data fits the model. The objective of regression analysis is to see how well a data series can be fitted to a function that can explain how the data series was created. Subtract each measurement from the mean, square the difference, and then add (sum) all the resultant measurements to get the sum of squares.

The sum of squares gets its name from the fact that it is calculated by adding the squared differences. It is a mathematical method for determining the function that best fits (varies the least) the data. One of the most essential outcomes in regression analysis is the sum of squares. As a general rule, a smaller sum of squares suggests a better model since the data is less variable.

xi represents individual values and x̄ is the mean.

The sum of squares (SS) is used to determine if two variables have a linear connection, and the residual sum of squares refers to any unexplained variability. The distance between each data point and the line of best fit is squared and then totaled to produce the sum of squares. This value will be minimized by using the line of greatest fit. Many more considerations than those listed above go into making an investing choice on which stock to buy.