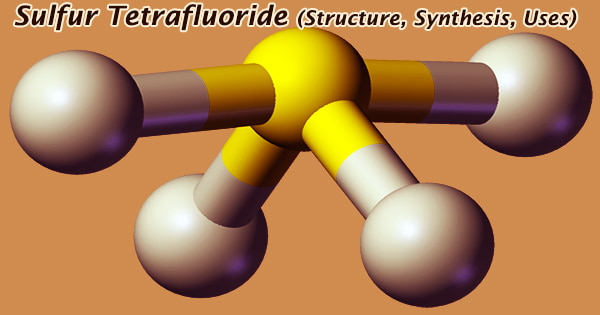 Sulfur tetrafluoride is an odorless, colorless gas having a sulfur odor. It is extremely poisonous when inhaled and causes severe irritation to the skin, eyes, and mucous membranes. It’s the chemical molecule SF4; it’s a colorless corrosive gas that produces deadly HF when it comes into contact with water or moisture. When it comes into contact with water and acids, it produces poisonous fluoride and sulfur oxide fumes as well as an acidic solution.

Despite these undesirable properties, this molecule is a valuable reagent for the synthesis of organofluorine compounds, some of which are useful in the pharmaceutical and specialized chemical industries. With water and acids, sulfur tetrafluoride produces poisonous fluoride and sulfur oxide fumes as well as an acidic solution. It has a higher density than air. The containers may violently burst or rocket if exposed to fire or extreme heat for an extended period of time. It’s also utilized as an oil repellent and a fluoridizing agent.

The formal oxidation state of sulfur in SF4 is +4. The first reagent used to transform aldehydes and ketones into gem-difluoro alkanes was sulfur tetrafluoride. It’s a highly reactive chemical that water quickly converts to sulfur oxide and hydrogen fluoride. It is a selective organic fluorinating agent, with S atoms bonding to sp3d hybrid orbitals on its molecular structure, and a distorted tetrahedral molecular shape at room temperature and pressure.

Sulfur tetrafluoride is a colorless gas with a strong pungent unpleasant odor comparable to sulfur dioxide; it is poisonous, does not burn or burst in the air, and stays stable above 600 degrees Celsius. It hydrolyzes quickly and produces white smoke in the air. A nonbonding lone pair of electrons occupy one of the three equatorial locations. As a result, there are two types of F ligands in the molecule: axial and equatorial.

When it comes into contact with water, it causes corrosion comparable to hydrofluoric acid. It fully hydrolyzes to generate hydrofluoric acid and sulfur dioxide; partial hydrolysis can produce hazardous thionyl fluoride; alkali solution can entirely absorb it and convert it to non-toxic salts; it is soluble in benzene. Because of the compound’s rapid interaction with water to form hydrogen fluoride and thionyl fluoride, exposure to the chemical will only have a local effect.

In contrast to SF4, SF6 contains sulfur in the 6+ state, which means that no valence electrons remain nonbonding on sulfur, resulting in a highly symmetrical octahedral structure. Sulfur tetrafluoride decomposes when it comes into contact with water, steam, or mineral acids, releasing poisonous and unpleasant vapors. Sulfur tetrafluoride generates very hazardous fluoride and sulfur oxide gases when heated to breakdown.

Even at temperatures below -50° C, explosively violent reactions involving 2-(hydroxymethyl)furan or 2-methyl-3-butyn-2-ol have been seen. Only one signal can be found in the 19F NMR spectra of SF4, indicating that the axial and equatorial F atom positions rapidly interconvert via pseudorotation. Sulfur tetrafluoride is extremely hazardous when inhaled, and it irritates the eyes and mucous membranes. Poisonous; if inhaled, it can be deadly.

Metal oxides can also be converted to fluorides using sulfur tetrafluoride. It can selectively fluorinate carbonyl and hydroxyl (substituted oxygen of carbonyl compounds); it is extensively employed in chemical high-grade and high-end liquid crystal material medicine, pesticide intermediates manufacturing sector, and it has irreplaceable position. Using bromine (Br2) instead of chlorine (Cl2), S and KF, a low temperature (e.g. 20–86 °C) method of generating SF4 with good yield has been demonstrated without the need for a reaction medium:

Sulfur hexafluoride (SF6), which is utilized as an electrical insulating material in circuit breakers, cables, capacitors, and transformers, and its degradation products, which are generated when electrical arcing occurs, are among the compounds of importance in this category. In recent years, SF4 has been supplanted by the easier-to-handle diethylaminosulfur trifluoride, Et2NSF3, “DAST,” where Et = CH3CH2. Sulfur tetrafluoride is produced in the lab by mixing SCl2 and NaF suspended in acetonitrile at around 77°C.

The chemicals generated are determined by the arcing circumstances. Sulfur tetrafluoride (SF4) is generated under anaerobic and anhydrous conditions; if moisture is present, the tetrafluoride may hydrolyze to yield thionyl fluoride (SOF2) and HF. Fluoride ion activity is affected by the overall ionic strength and pH of the solution, as well as fluoride complexing species. By adding an adequate buffer, a homogeneous ionic strength background is created, pH is adjusted, and complexes are broken up, allowing the electrode to effectively measure concn. Sulfur hexafluoride also produces sulfuryl fluoride (SO2F2), disulfur decafluoride (S2F10), sulfur pentafluoride (SF5), and sulfur dioxide.