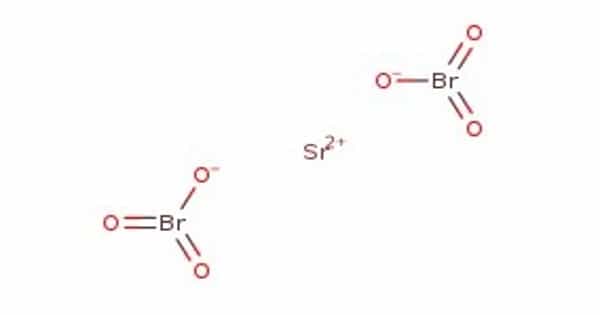 Strontium boride (SrB6) is a chemical compound that is inorganic. It has the appearance of a crystalline black powder. It appears as a crystalline black powder at room temperature. A closer look reveals slightly translucent dark red crystals that are capable of scratching quartz. It is extremely stable, with a high melting point and density. Although it is not toxic, it is irritating to the skin, eyes, and respiratory tract.

It has the molecular formula SrB6 and a molecular weight of 152.49 g/mol. It has a density of 3.39 g/cm3 and a melting point of 2235.0°C. It is a black crystalline solid (15.0°C). At low temperatures, strontium boride, like other alkali earth metal borides, has been shown to exhibit weak ferromagnetism.

At low temperatures, strontium boride, like other alkali-earth metal borides, has been shown to exhibit weak ferromagnetism. Some believe this is due to minor impurities or aberrations in the crystal lattice, while others argue that other explanations are required. Strontium boride has also been investigated for its semiconducting properties at low temperatures.

Strontium boride can be synthesized directly from its constituent elements. Boron melts at 2076°C and Sr melts at 777°C. As a result, if a vapor of Sr metal at >850°C (red-heat) is passed over boron crystals, the reaction produces the desired boride. However, it is preferable to heat the well-mixed powders of Sr and B to obtain specific compounds in order to obtain stoichiometric compositions: Sr + 6B→SrB6