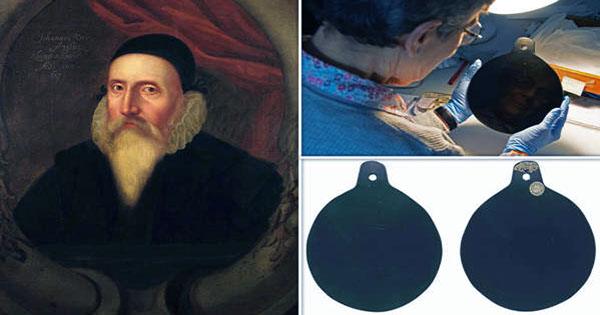 The origins of a mysterious “spirit mirror” that connected the courts of English queens to the occult world have been traced back to Mesoamerican volcanoes. According to the latest research, the Aztecs created the volcanic-black mirror around 500 years ago, it transferred over the Atlantic soon after the Spanish colonial conquest, and it ended up in the hands of Elizabeth I’s closest confidants. The amazing narrative behind this alien artifact was recently published in Antiquity.

John Dee, an English mathematician, astronomer, occultist, and alchemist who served as an advisor to Queen Elizabeth I (1533–1603), was known to own the mirror. He was best known as Elizabeth I’s court astronomer, but being a half-wizard, half-Renaissance polymath, he grew increasingly immersed in magic, the supernatural, and the occult in his later years. The device, which is essentially a slightly gleaming black paddle, said used to connect with spiritual beings. People would gaze intensely into the reflective paddle, which was made of obsidian, a black volcanic glass, and claim to see faint glimmers of the spirit world.

Professor Stuart Campbell, lead study author and archeologists from the University of Manchester, told IFLScience, “John Dee probably used several different objects to try to communicate with spirits or as he tended to term them angels – he reconciled his interest in the supernatural with Christian piety.” “The obsidian mirror was most likely one of a number of mirrors or crystal balls used to summon the spirits. John Dee did not do this directly, but rather through mediums who claimed to be able to speak with spirits or angels. While the mediums’ honesty was doubtful at best, John Dee himself appears to have fully believed in the procedure “Professor Campbell elaborated.”I’d imagine the obsidian mirror’s weak reflections lent themselves to theatrical claims that concealed items could be seen within it.”

Hundreds of years after John Dee’s death, a legend circulated that Aztecs in the Americas had constructed the object — after all, the Aztecs employed obsidian mirrors for spiritual purposes and ceremonial rites. However, there was no concrete evidence as to how John Dee obtained the artifact.

An international team of experts has used geochemical research to unravel the mystery of the mirror’s origins in a new study. They studied John Dee’s mirror, as well as two additional Aztec mirrors and a polished rectangular obsidian block stored at the British Museum. Their findings clearly suggest that all four objects were manufactured from Mexican obsidian, which the Aztecs used extensively. The mirror used by John Dee appears to be made of obsidian mined near Pachuca. Professor Stuart Campbell added, “It was most likely looted or supplied as coercive ‘tribute.'”

Following European colonization of the Americas in the 15th and 16th centuries, widespread trade between the “New World” and the “Old World” arose. We may fairly conclude that John Dee’s mystical mirror was one of many artifacts swept up in this huge trade of products, ideas, and diseases, based on this new study.

“We know that extremely large quantities of strange items were carried back at this time, and several identical mirrors that are now in important European museums probably certainly were brought to Europe at that time,” Campbell said. “We know that Spanish conquistador Hernán Cortés occasionally commissioned goods from [Aztec] artisans in order to return them to the Spanish court.” As a result, it’s probable that some of these mirrors were constructed specifically for sending back to Europe during the Aztec Empire’s conquest,” he noted.