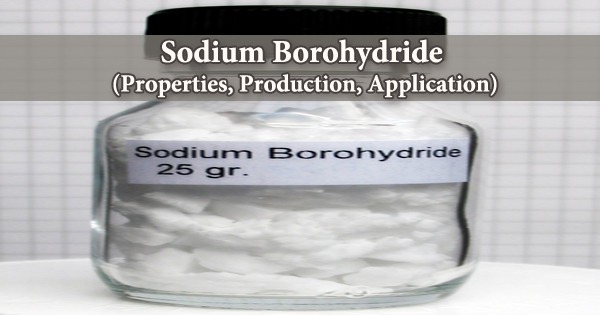 Sodium borohydride is a white to off-white fine crystalline powder or lump that is also known as sodium tetrahydridoborate and sodium tetrahydroborate. It has the formula NaBH4 and is an inorganic chemical. This white substance, which is generally found as a powder, is a reducing agent used in chemistry in both the laboratory and on a large scale. Water breaks it down into sodium hydroxide, a caustic substance, and hydrogen, a combustible gas. This reaction’s heat may be enough to ignite the hydrogen.

It’s been tried as a pretreatment for wood pulping, but it’s too expensive to be marketed. At normal temperature, a quick reaction with methanol produces hydrogen. It is hygroscopic, meaning it readily deliquesces when exposed to water. Soluble in water and lower alcohols, ammonia, insoluble in ether, benzene, and hydrocarbons; boiling point (vacuum): 500 °C; melting point: 400 °C; relative density (water = 1): 1.07. The substance itself is easy to light and burns quickly once lit. It is utilized in the production of other chemicals, the treatment of wastewater, and a variety of other applications.

Although it slowly hydrolyzes, the molecule is soluble in alcohols, some ethers, and water. Trimethyl borate is treated with sodium hydride at a temperature of 250-27oC to produce sodium borohydride on an industrial scale. This reaction’s balanced chemical equation is as follows:

In both inorganic and organic synthesis, sodium borohydride is commonly employed as a reducing agent. It has a great selective reduction ability, allowing it to reduce a carbonyl group to a hydroxyl group while avoiding the carbon-carbon double and triple bond reactions. H. I. Schlesinger, who led a team looking for volatile uranium compounds in the 1940s, found the chemical. In 1953, the findings of this wartime study were declassified and published.

Sodium borohydride is a metal tetrahydridoborate and an inorganic sodium salt. Recrystallization from heated (50 °C) diglyme can be used to purify it. In protic solvents like water and lesser alcohols, sodium borohydride dissolves. A tiny quantity of sodium borohydride can be used to convert nitrile to aldehyde, with any excess being converted to an amine. This chemical may also be made by heating borax, metallic sodium, dihydrogen, and silicon dioxide to 700oC and reacting them together. The following is a representation of this reaction:

The gases produced from a saturated solution of sodium borohydride in dimethylformamide at 17 °C can spontaneously ignite, resulting in an explosion. This compound’s production necessitates the usage of lithium hydride. However, because lithium hydride is in short supply, sodium hydride is substituted as the raw material, and sodium borohydride is rediscovered as a result. Millions of kilos are generated each year, greatly surpassing any other hydride reduction agent’s output.

A several-year-old 100 mL glass container containing 25 g of sodium borohydride burst when being opened to remove a portion a few hours after the last opening. Inorganic borates, such as borosilicate glass and borax (Na2B4O7), can also be used to make it:

At STP, sodium borohydride has a density of 1.07 grams per cubic centimeter. It has a melting point of 673K, however, at this temperature, it decomposes. Alcohol, tetrahydrofuran, DMF, and water are all common solvents. It does not decrease an ester group, a carboxyl group, or an amide in most cases. Because sodium borohydride may rapidly disintegrate in acidic environments to create hydrogen gas, it cannot be utilized in acidic environments but can be used in alkaline environments.

In acidic and aqueous environments, sodium borohydride decomposes, while in basic media it does not. The most common application of NaBH4 is in the production of Na2S2O4 (sodium dithionite, a wood pulp bleaching agent) from SO2. In non-aqueous solvents, a reducing agent for aldehydes, ketones, and Schiff bases. Acids, esters, acid chlorides, disulfides, nitriles, and inorganic anions are all reduced. Inorganic compounds are also employed to make diborane, as a foaming agent, and as a scavenger for residues of aldehyde, ketones, and peroxides.

The material’s influence on air quality, possible movement in soil or water, impacts on an animal, aquatic, and plant life, and compliance with environmental and public health standards must all be considered in the final disposal of the chemical. Under extremely mild circumstances, sodium borohydride can reduce the carbonyl of aldehydes and ketones to form primary and secondary alcohols. Because it is a medium-strength reducing agent, it has high chemical selectivity. It does not react with the ester, amide, and only decreases active aldehyde and ketone carbonyl groups.