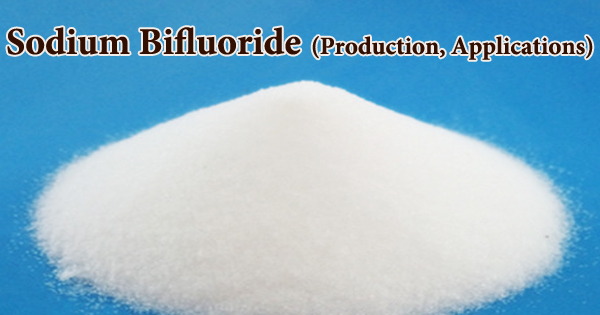 Sodium bifluoride is a white crystalline solid; it is an inorganic compound with the formula NaHF2. It is water-soluble yet corrosive to tissue. It’s used to preserve anatomical and zoological specimens, as well as in metal plating and a variety of other applications. It’s a sodium cation (Na+) salt with a bifluoride anion (HF2–). It’s a water-soluble white substance that decomposes when heated.

Sodium bifluoride is a non-flammable, hygroscopic substance with a strong odor. It has a variety of industrial applications. Glass, organic compounds, metals, and acids are all incompatible with sodium bifluoride. It is made by neutralizing leftover hydrogen fluoride generated during the manufacture of superphosphate fertilizers. Sodium carbonate and sodium hydroxide are common bases. The process is divided into two stages, as shown by the hydroxide:

The resultant solutions have a pH of less than 7.0 and include considerable amounts of hydrogen ions. To neutralize bases, they react as acids. These neutralizations produce heat, although not nearly as much as inorganic acids, inorganic oxoacids, or carboxylic acid neutralization. They typically don’t react as either oxidizing or reducing agents, however this isn’t always the case.

As an aqueous solution, sodium bifluoride is a white crystalline powder that is corrosive to tissues. The material itself is non-combustible, however, it may break down when heated, producing caustic and/or poisonous gases. Some are oxidizers, which can cause combustibles to ignite (wood, paper, oil, clothing, etc.). Metal contact can produce flammable hydrogen gas. When heated, containers have the potential to explode.

Ingestion of this substance is extremely hazardous to humans; 1 teaspoonful to 1 ounce can be deadly. Hydrofluoric acid is formed when sodium bifluoride interacts with water or moist skin. When heated to a gaseous state, it also emits hydrofluoric acid and hydrogen gas. When the chemical comes into touch with strong acids, strong bases, metal, water, or glass, it decomposes. Chromyl chloride, nitric acid, red phosphorus, sodium peroxide, diethyl sulfoxide, and diethylzinc all react violently with sodium bifluoride.

Many of these substances function as catalysts in organic processes. Hydrofluoric acid, which may inflict severe chemical burns and is one of the few compounds that can etch glass, may be present in sodium bifluoride solutions. Fluoride, unlike other halide ions, is highly reactive, functioning as a weak base and participating in a variety of processes. Hydrofluoric acid and sodium fluoride are formed when sodium bifluoride dissociates:

To remove HF from elemental fluorine (F2) generated by electrolysis, the process is reversed. When the salt is dissolved and the solid is heated, this equilibrium is achieved. It interacts with acids to produce HF, as do other bifluorides. Its interaction with bisulfate to generate sodium sulfate and hydrogen fluoride is illustrative. Contact with the skin can cause irritation and ulceration, while contact with the eyes can induce burns. Water, foam, CO2, and dry chemicals can all be used to put out a fire. When heated to breakdown, poisonous gases of Fand Na2O are released.

Sodium bifluoride serves primarily as a precursor to sodium fluoride, which is manufactured in millions of tons each year. Fluorides, in particular, react aggressively with substances containing calcium, magnesium, or silicon ions, making soluble fluoride solutions caustic to both living tissue and glass. The chemical can also be used for cleaning, because to fluoride’s affinity for iron and silicon oxides.