Home Business Economics The Relationship Between Inflation And Unemployment 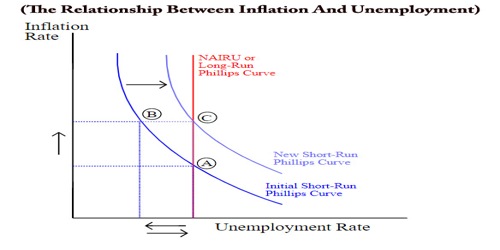 The trade-off between inflation and unemployment was first reported by A. W. Phillips in 1958 and so has been christened the Phillips curve. The simple intuition behind this trade-off is that as unemployment falls, workers are empowered to push for higher wages. Firms try to pass these higher wage costs on to consumers, resulting in higher prices and an inflationary buildup in the economy. The trade-off suggested by the Phillips curve implies that policymakers can target low inflation rates or low unemployment, but not both. During the 1960s, monetarists emphasized price stability (low inflation), while Keynesians more often emphasized job creation.

The relationship between inflation and unemployment has traditionally been an inverse correlation. However, this relationship is more complicated than it appears at first glance and has broken down on a number of occasions over the past 45 years. 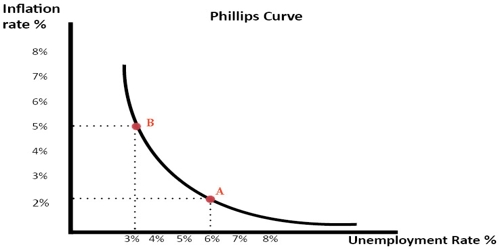 During the 1960s, the Phillips curve rose to prominence because it seemed to accurately depict real-world macroeconomics. However, the stagflation of the 1970s shattered any illusions that the Phillips curve was a stable and predictable policy tool. Nowadays, modern economists reject the idea of a stable Phillips curve, but they agree that there is a trade-off between inflation and unemployment in the short-run. Given a stationary aggregate supply curve, increases in aggregate demand create increases in real output. As output increases, unemployment decreases. With more people employed in the workforce, spending within the economy increases, and demand-pull inflation occurs rising price levels. 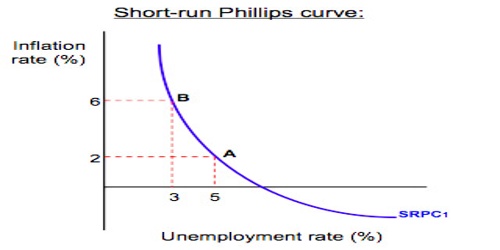 In the above diagram of the Phillips curve, there are three important points. A is the starting point of our consideration according to which there is an equilibrium unemployment and inflation rate, 8% according to the intersection of the graph LRPC and SRPC1. This means that there is an increase in the level of wages at the long run is 8%. Now a situation comes when there is a cut down in the rate of growth of money supply is decreased to 4% by the government but the still rate of inflation is 8%. This will lead to a decrease the real money supply in the economy. Now, when there is a decrease in real money, this causes an interest rate to increase. Hence there will be a decrease in investment and consumption of the private sector will cause an increase in unemployment.

With inflation rising (albeit slowly, and still relatively mild at around 4.2%), some business sectors will no doubt begin clamoring for tighter monetary policies that sacrifice job-creation and wage growth by slowing economic growth. But these fears of inflation are probably misplaced. A moderate rate of inflation is conducive to the growth of real investment, and in the context of a decades-long squeeze on workers’ wage share, there is room to expand employment without setting off a wage-price spiral. What workers need is not greater fiscal and monetary austerity, but rather a revival of a Keynesian program of ”employment targeting“ that would sustain full employment and empower workers to push for higher wages. It’s not likely; however, that the owners of capital and their political allies would sit idly by where such a program to be enacted. 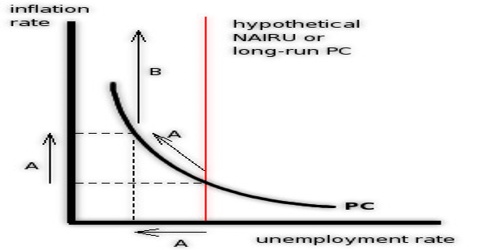 In recent years, the economy has experienced low unemployment, low inflation, and negligible wage gains. However, the Federal Reserve is currently engaged in tightening monetary policy or hiking interest rates to combat the potential of inflation. We have yet to see how these policy moves will have an impact on the economy, wages, and prices.

Phillips Curve is considered to be the best possible technique exploring this important relationship. There had been few changes that we had seen in the Phillips curve that earlier there was just a concept of Short-Run Phillips Curve but it had few restrictions that there may be an increase in wages and money illusion to the people. Hence in order to remove these loopholes, Long-Run Phillips Curve was generated which covers the situation of wage increase and money illusion as well. Unemployment and Inflation are two important macroeconomic techniques.

Hence at last we can simply conclude that unemployment and inflation are related and this relationship is explored by the Phillips curve which must be considered as one of a major victory in terms of macroeconomics.