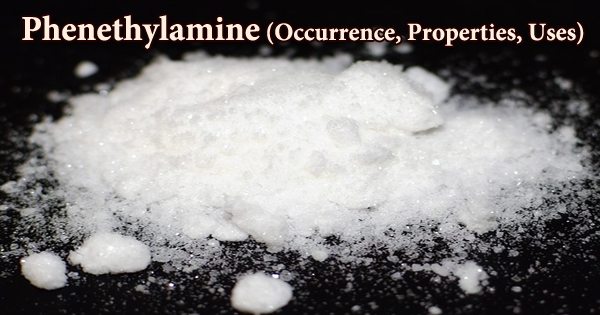 Phenethylamine (PEA) is a chemical that occurs naturally in the body and can also be synthesized in the lab. It’s an organic compound, a trace amine, and a natural monoamine alkaloid that acts as a central nervous system stimulant in humans. It’s used to boost athletic performance, depression, weight loss, mood, and attention, but there’s no clear scientific proof to back it up. Phenethylamine regulates monoamine neurotransmission in the brain by binding to trace amine-associated receptor 1 (TAAR1) in monoamine neurons and inhibiting vesicular monoamine transporter 2 (VMAT2).

Seizures of phenethylamines were first recorded in the United States and Europe, and since 2009, compounds like 2C-E, 2C-I, 4-FA, and PMMA have been reported by a number of countries across the world. Other phenethylamines increasingly reported to UNODC since 2011 include 4-FMA, 5-APB, 6-APB and 2C-C-NBOMe. PEA is actually sold as a dietary supplement for purported mood and weight loss-related therapeutic benefits; however, a significant amount of orally ingested phenethylamine is metabolized in the small intestine by monoamine oxidase B (MAO-B) and then converted to phenylacetic acid by aldehyde dehydrogenase (ALDH).

Phenylethylamine was detected at quantities of 114-238 pg/mg protein in the cervical spinal cord dorsal and ventral horns, zona intermedia, and lumbar cord dorsal and ventral horns of rats. To put it another way, this chemical class encompasses derivatives generated by substituents replacing one or more hydrogen atoms in the phenethylamine core structure. Caudate nucleus (218 pg/mg) and cerebellum (73 pg/mg) values were discovered.

The amino group of phenethylamine is connected to a benzene ring via a two-carbon, or ethyl group, making it a primary amine. It causes the body to produce specific chemicals that are linked to depression and other psychiatric disorders. Taking phenethylamine as a supplement may help people who don’t produce enough phenethylamine naturally. However, too much phenethylamine might have comparable negative effects to the stimulant amphetamine.

Phenethylamine is a strong basic compound with a pKb of 4.17 (or pKa of 9.83) when measured with the HCl salt, and it forms a stable crystalline hydrochloride salt with a melting point of 217 °C. The production of phenethylamines and amphetamine replacements has been reported in a number of investigations. Monoamine oxidase catalyzes the conversion of 2-phenylethylamine to phenylacetaldehyde, whereas aldehyde dehydrogenase and possibly aldehyde oxidase catalyze the conversion of the reactive aldehyde to its acid equivalent, with xanthine oxidase playing a minor role.

Many substituted phenethylamines are psychoactive medications that fall into a range of categories. Phenethylamine can also be made by cathodic reduction of benzyl cyanide in a split cell. The ‘D series’ of phenethylamines are said to be more strong, longer-lasting, and more likely to cause vasoconstriction than other members of the phenethylamine family. By attaching the beta-aminoethyl side chain to the phenyl ring, phenethylamine structures can be assembled for the production of substances including adrenaline, amphetamines, tyrosine, and dopamine.

Disulfiram totally reduced the generation of phenylacetic acid, whereas isovanillin inhibited acid formation to a lesser extent and allopurinol had little or no impact. In a resting state, aromatic amino acid decarboxylase produces phenethylamine from l-phenylalanine in catecholamine neurons at roughly the same rate as dopamine. The retention statistics for 2-phenylethylamine and its derivatives were obtained using high-performance liquid chromatography.