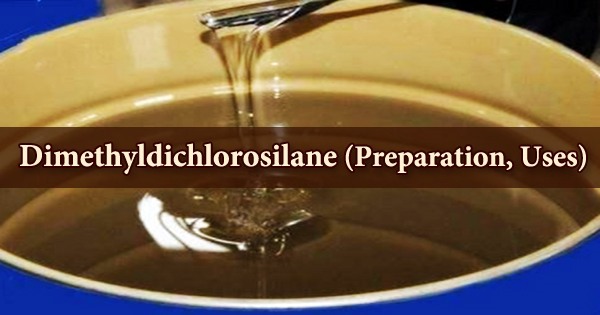 The molecular formula of dichlorodimethylsilane is Si(CH3)2Cl2, and it is a tetrahedral organosilicon compound. It is a colorless fuming liquid with a strong odor and a flashpoint of 16°F. Burns can be caused by vapor and liquid; vapors are denser than water and heavier than air. On a large scale, dimethyldichlorosilane is produced as the primary precursor to dimethylsilicone and polysilane compounds. At ambient temperature, the chemical is a white liquid with a pungent odor that easily interacts with water to create both cyclic and linear Si-O chains. Dichlorodimethylsilane is used as a key precursor to polysilane and dimethylsilicone compounds on a large scale.

Charles Friedel and James Crafts produced tetraethylsilane from diethylzinc and silicon tetrachloride and published the first organosilicon compounds in 1863. However, it wasn’t until Frederick Kipping and his students started experimenting with diorganodichlorosilanes (R2SiCl2), which were made by combining silicon tetrachloride with Grignard reagents, that considerable progress in organosilicon chemistry was made. Many aircraft firms needed improved insulators for sealing materials and electric motors for aircraft engines in the 1930s, which necessitated the development of efficient dichlorodimethylsilane production.

Cu2O is used as a catalyst to transport methyl chloride through a heated tube packed with copper (I) chloride and powdered silicon to produce dichlorodimethylsilane. Eugene G. Rochow, a scientist at General Electric, and Richard Müller, working independently in Germany, discovered an alternative synthesis of dimethyldichlorosilane in 1941–1942, allowing it to be produced on a large scale. In today’s industry, the Direct Synthesis, or Direct method, involves the reaction of elemental silicon with methyl chloride in the presence of a copper catalyst.

Following that, methyl chloride is fed through the reactor, yielding mostly dimethyldichlorosilane.

The mechanism of direct synthesis has yet to be discovered. The copper catalyst, on the other hand, is required for the reaction to proceed. It emits poisonous hydrogen chloride fumes when heated to break down. The products of this reaction, in addition to dimethyldichlorosilane, are CH3SiCl3, CH3SiHCl2, and (CH3)3SiCl, which are separated from each other by fractional distillation. At high temperatures, silanes decompose to release hydrogen and deposit high purity silicon, which leads to some of silanes’ most common applications.

Chlorosilanes, such as Dichlorodimethylsilane, are compounds in which silicon is connected to one to four chlorine atoms, with additional hydrogen and/or alkyl group linkages. It produces heat and toxic, corrosive hydrogen chloride fumes when it combines with water, moist air, or steam. The concentration of chain-terminating groups added to the reaction mixture determines the length of the resultant polymer. Because the pace of the reaction is dictated by reagent transfer across the aqueous-organic phase border, the reaction is most efficient in turbulent conditions.

The capacity of organo-functional silanes to attach organic polymer systems to inorganic substrates is well known. Dimethoxydimethylsilanes are formed when dimethyldichlorosilane interacts with methanol.

Toxic or combustible gases are produced when chlorosilanes react violently with organic and inorganic acids, as well as bases. Although dimethoxydimethylsilanes hydrolysis is slower, it is preferable when the hydrochloric acid byproduct is undesirable:

Dimethyldichlorosilane cannot be handled in air since it is rapidly hydrolyzed. The breakage of the Si-H bond and creation of the silicon-halogen bond normally occurs in good yield when organosilanes react with halogens and halogen cmpd. The reaction with fluorine, on the other hand, does not go as planned due to the cleavage of not only the Si-H but also the C-Si and C-H bonds. Chlorination, bromine, and iodine are used to directly halogenate water.

Silicones are mostly manufactured with dichlorodimethylsilane. It’s also used in the production of polysilanes, which are the primary precursors to silicon carbide. Another advantage of switching from dimethyldichlorosilane to bis(dimethylamino)silane is that when paired with a disilanol comonomer, it produces a precisely alternating polymer. Dichlorodimethylsilane can be used as a coating over the glass to prevent microparticle adsorption in practical applications.