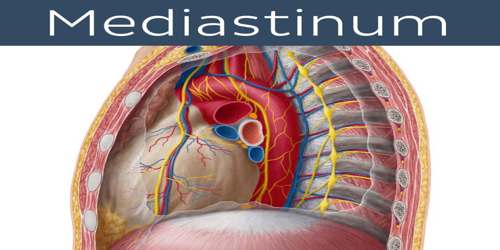 Mediastinum is the area in the chest between the lungs that contains the heart, part of the windpipe (the trachea), the esophagus, and the great vessels including the ascending aorta and right and left pulmonary arteries essentially all of the organs in the chest except the lungs. It is the central compartment of the thoracic cavity surrounded by loose connective tissue, as an undelineated region that contains a group of structures within the thorax. 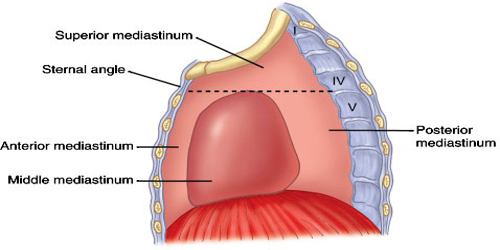 It extends from the sternum, or breastbone, back to the vertebral column and is bounded laterally by the pericardium, the membrane enclosing the heart, and the mediastinal pleurae, membranes that are continuous with those lining the thoracic cage. The mediastinum is a division of the thoracic cavity; it contains the heart, thymus gland, portions of the esophagus and trachea, and other structures.

For clinical purposes it is traditionally divided into the anterior, middle, posterior, and superior regions. Mediastinitis is inflammation of the tissues in the mediastinum, usually bacterial and due to rupture of organs in the mediastinum. As the infection can progress very quickly, this is a serious condition.

Structure and Functions of Mediastinum

Mediastinum is a highly mobile region due to the loose connective tissue uniting its hollow visceral structures, and the elasticity of the lung and parietal pleura on each of its sides. It is surrounded by the chest wall in front, the lungs to the sides and the spine at the back. It extends from the sternum in front to the vertebral column behind, and contains all the organs of the thorax except the lungs. It is continuous with the loose connective tissue of the neck.

The mediastinum is divided into 3 main regions: 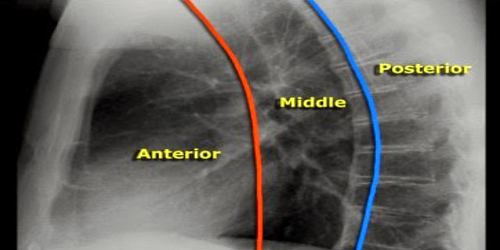 The superior mediastinum lies posterior to the manubrium of the sternum, and anterior to the first four thoracic vertebrae. It contains several important structures that include the lower ends of the sternohyoid, sternothyroid and longus colli muscles, thymus remnants, great vessels and veins, the trachea, the esophagus, related nerves and the thoracic duct, in addition to the paratracheal, brachiocephalic and tracheobronchial lymph nodes.