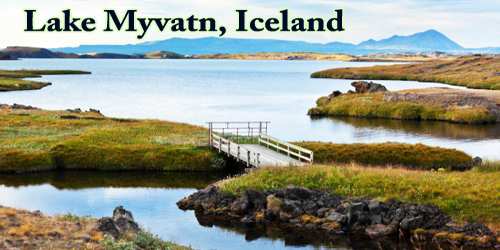 Lake Mývatn is a part of a sightseeing route named the Diamond Circle, that also visits the town of Húsavík, the canyon of Ásbyrgi, and Dettifoss waterfall. Other attractions visited on certain tours include Goðafoss waterfall and the Hljóðaklettar rocks. This area is jam-packed with outdoor activities, including walking, birdwatching, and bathing in hot springs. Since the year 2000, a marathon around the lake takes place in summer.

Lake Mývatn sits directly on top of a seismic rift and it’s surrounded by volcanic features. The enormous black crater, Hverfjall, looms over the lake and visitors can get fantastic views from its summit. To the south, pseudocraters pockmark the landscape on the lake’s shore.

Mývatn(a) is a shallow lake situated in an area of active volcanism in the north of Iceland, not far from Krafla volcano. It has a high amount of biological activity. By the lake and the surrounding wetlands, there is a variety of waterbirds, especially ducks. 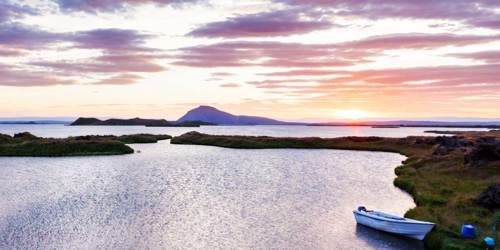 The lake was created by a large basaltic lava eruption 2300 years ago, and the surrounding landscape is dominated by volcanic landforms, including lava pillars and rootless vents (pseudocraters). The effluent river Laxá is known for its rich fishing for brown trout and Atlantic salmon. The name of the lake (Icelandic mý (“midge”) and vatn (“lake”); the lake of midges) comes from the huge numbers of midges to be found there in the summer.

The name Mývatn is sometimes used not only for the lake but for the whole surrounding inhabited area. The River Laxá, Lake Mývatn and the surrounding wetlands are protected as a nature reserve (the Mývatn-Laxá Nature Conservation Area, which occupies 4,400 km2 (440,000 ha).

Mývatn sits about an incredibly active geothermal area, giving it unique and beautiful geology. After all, it is close to sites such as Krafla caldera, which contains the notorious Víti volcano, the name of which translates to ‘hell’.

Many of the islands here are thus pseudocraters, formed by steam explosions as magma rose beneath pockets of water, and many are bizarre basalt columns, rising vertically from the surface, formed by rapid cooling after an eruption.

The high amount of geothermal activity beneath Mývatn, of course, presents the opportunity for bathing in naturally heated waters. This is best done at the Mývatn Nature Baths, a beautiful establishment with serene waters, incredible views, and a reasonable entry fee.

The Lake Mývatn region completes the Diamond Circle route and is by no means overshadowed by the other features. Animals lovers will find plenty of birdwatching opportunities; those into fishing will delight in the bountiful waters; any seeking relaxation can bathe in the Nature Baths, and all should marvel over the scale of the lava fortress Dimmuborgir.

The lake is fed by nutrient-rich spring water and has a high abundance of aquatic insects (Chironomidae) and Cladocera that form an attractive food supply for ducks. Thirteen species of ducks nest here. The duck species composition is unique in the mixture of Eurasian and North American elements and of boreal and arctic species. Most of the ducks are migratory, arriving in late April early May from north-western Europe. The most abundant is the tufted duck, which immigrated to Iceland at the end of the 19th century. The greater scaup is the second most common duck species. Other common species include the Barrow’s goldeneye, red-breasted merganser, wigeon, gadwall, mallard, common scoter, long-tailed duck, and Eurasian teal. 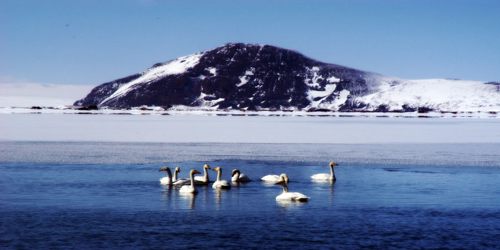 Mývatn’s surrounding vegetation and plentiful food make it a happy home for voles, mice, and rats that have spread all over Iceland, providing tasty treats for Iceland’s only native land mammal, the Arctic Fox. Visitors, however, will have to keep a close eye out for these, as they are experts in camouflage.

In terms of flora, the most interesting plant life at Mývatn actually exists just beneath the surface of the water. Marimo are ‘moss balls’, bizarre spheres of fluffy green algae that are found in very few other places around the world, namely Japan (where they got their name), Scotland, Estonia and Australia.

Lake Mývatn was created about 2300 years ago by a large fissure eruption pouring out basaltic lava. The lava flowed down Laxárdalur Valley to the lowland plain of Aðaldalur where it entered the Arctic Ocean about 50 km away from Mývatn. The crater row that was formed on top of the eruptive fissure is called Þrengslaborgir (or Lúdentarborgir) and has often been used as a textbook example of this type of volcanic activity. There was a large lake in the area at the time, a precursor of the present-day Mývatn. When the glowing lava encountered the lake some of the water-logged lake sediment was trapped underneath it. The ensuing steam explosions tore the lava into small pieces that were thrown up into the air, together with some of the lake.

The Mývatn district lies on the western border of the volcanic zone which cuts across northeastern Iceland from north to south and is an extension of the Mid-Atlantic Ridge. All geological formations are quite recent, dating from the Ice Age and postglacial times. Because of the volcanic origin, the lake was formerly mined for diatomite, but this ceased in 2004.

Visitors to Mývatn often wish to spend more than just a single day exploring its many surrounding locations. Primary amongst these is Dimmuborgir, a lava field that truly reflects the dramatic consequences of a volcanism in Iceland. This area is steeped in folklore and is home to the thirteen ‘Santas’ of Iceland, the Yule Lads.

It was also here that many of the Game of Thrones scenes were shot such as Mance Rayder’s wildling camp at Dimmuborgir and Grjótagjá cave, where Jon and Ygritte shared an evening together. Though this site can be admired from the shore, the water temperature is not monitored and can heat up very quickly, so visitors are asked not to take a dip.

Those with an interest in Iceland’s strange geothermal and geological sites should also check out the Skútustadagígar pseudo-craters and the aforementioned Víti crater and its surrounding lava field. There are also several geothermal hot spots around Krafla and the Námaskarð Pass which is a fascinating and primordial place.

Lake Mývatn is located on the Ring Road that fully encircles the country, making further sites easily reachable. To the west is the ‘Capital of the North’, Akureyri, a charming town with the highest population outside of the capital area.

To the east, visitors can find the largest waterfall in Iceland, Dettifoss which also happens to be the most powerful waterfall in Europe, and the incredible horseshoe-shaped canyon, Ásbyrgi. This feature was said to have formed by the stomping of one of the feet of Oðinn’s eight-legged horse as it leapt through the sky.