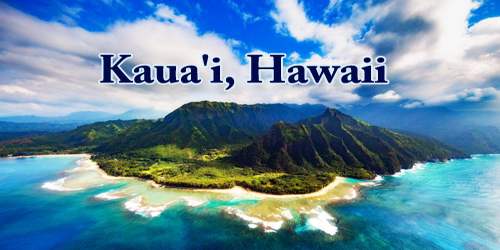 Kauaʻi, (Hawaiian: kɐwˈwɐʔi) anglicized as Kauai(a) (English: /kaʊˈaɪ(i)/ kow-EYE(-ee)), the 2nd oldest island of the Hawaiian Islands (after Ni’ihau), is a place where worries vanish in the trade winds, warm saltwater laps the golden sands of Kauai’s Beaches and the rain-forests of Koke’e host earth’s rarest plants and birds. With an area of 562.3 square miles (1,456.4 km2), it is the fourth-largest of these islands and the 21st largest island in the United States. Known also as the “Garden Isle”, Kauaʻi lies 105 miles (169 km) across the Kauaʻi Channel, northwest of Oʻahu. This island is the site of Waimea Canyon State Park. 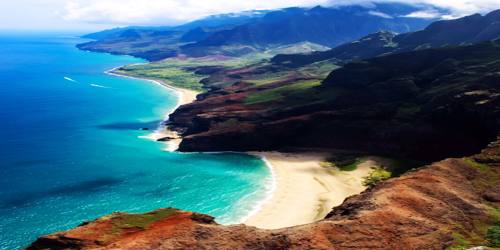 Called the Garden Isle, Kaua’i is a tropical Eden, with lush rainforests, waterfalls, and spectacular green coastal peaks. A natural masterpiece of dramatic lava-sculpted landscapes, the island has a more laid-back vibe than its popular sister islands of Maui and Oahu. The nearly circular island is dominated by Mount Waialeale, rising to 5,243 feet (1,598 metres) at the island’s center. The mountain slopes are dissected by fertile valleys and deep fissures, and the island is fringed in coastal areas by marginal lowlands. Though Kauai is known for being home to one of the rainiest places on earth, the island is comprised of several microclimates, and the area around touristy Poipu tends to be drier.

Kauai has some of the most unique geographical, natural beauty of any island on earth. Aside from the being the wettest place on earth with an average annual rainfall of 440 inches (over 36.5 feet) the 553 square mile island of Kauai is complete with deserts, rainforests, beaches, swamps, and mountains. Kauai has Hawaii’s only consistently navigable rivers.

The first Polynesians to reach the Hawaiian Islands are said to have landed at Kauai a millennium ago and settled at the mouth of the Wailua River. The mythical people known as the Menehune (“little people”) are said to have constructed some of the island’s landmarks, notably a 900-foot (275-metre) stone wall that impounds the 1,000-year-old Menehune Fishpond (also called Alekoko) at Niumalu, near Lihue. The island was the site of the first Hawaiian landing (1778) of the English explorer-navigator Capt. James Cook. Kauai and the small island of Niihau to the west were the only Hawaiian islands to resist conquest by King Kamehameha I in the late 18th century, although they were unified with the rest of Hawaii in 1810 through peaceful negotiations.

Hawaiian narrative locates the name’s origin in the legend of Hawaiʻiloa, the Polynesian navigator credited with the discovery of the Hawaiʻian Islands. The story relates how he named the island of Kauaʻi after a favorite son; a possible translation of Kauaʻi is “place around the neck”, describing how a father would carry a favorite child. Another possible translation is “food season”.

Kauaʻi was known for its distinct dialect of the Hawaiian language; this survives on Niʻihau. While the standard language today adopts the dialect of Hawaiʻi Island, which has the sound (k), the Kauaʻi dialect was known for pronouncing this as (t). In effect, Kauaʻi dialect retained the old pan-Polynesian /t/, while “standard” Hawaiʻi dialect has changed it to the (k). Therefore, the native name for Kauaʻi was said as Tauaʻi, and the major settlement of Kapaʻa would have been pronounced as Tapaʻa.

Cities include Lihue, which is the island’s chief port and business center, in the southeast, and Kapaa, on the east-central coast. Sugar was formerly the main agricultural product, but production ceased in the early 21st century after a decades-long decline. Tourism is now the main economic activity. There is diversified manufacturing, especially of tourist-oriented goods. Coffee also contributes to the economy. The island’s primary airport is in Lihue.

Kauaʻi’s origins are volcanic, the island having been formed by the passage of the Pacific Plate over the Hawaii hotspot. At approximately five million years old, it is the oldest of the main islands. The highest peak on this mountainous island is Kawaikini at 5,243 feet (1,598 m). The second highest peak is Mount Waiʻaleʻale near the center of the island, 5,148 ft (1,569 m) above sea level. One of the wettest spots on earth, with an annual average rainfall of 460 inches (38.3 ft; 11.7 m), is located on the east side of Mount Waiʻaleʻale.

On the west side of the island, Waimea town is located at the mouth of the Waimea River, whose flow formed Waimea Canyon, one of the world’s most scenic canyons, which is part of Waimea Canyon State Park. At three thousand feet (910 m) deep, Waimea Canyon is often referred to as “The Grand Canyon of the Pacific”. Kokeo Point lies on the south side of the island. The Na Pali Coast is a center for recreation in a wild setting, including kayaking past the beaches or hiking on the trail along the coastal cliffs. The headland, Kuahonu Point, is on the south-east of the island.

Underwater, visitors will find colorful coral reefs, where turtles and tropical fish swim. On land, you can bask on golden beaches, admire the cloud-capped scenery from the cliffs above Hanalei Bay, hike among the velvety peaks of the breathtaking Napali Coast, and explore the deep and jungly 10-mile-long Waimea Canyon. Tropical gardens, waterfalls, cute coastal towns, and fantastic surf breaks are other top tourist attractions. 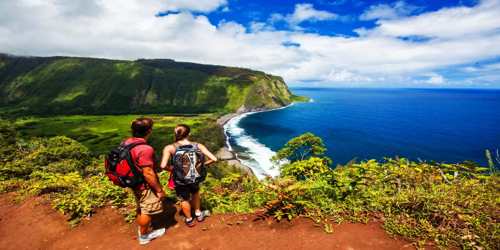 Notable museums, concentrated in Lihue, include the Kauai Museum, which features the work of local artists and exhibits on Hawaiian history, and the Grove Farm Homestead Museum, a historic sugar plantation. On the west side of the island is Waimea Canyon, known as the “Grand Canyon of the Pacific,” some 14 miles (23 km) long, 1 mile (1.6 km) wide, and up to 3,600 feet (1,100 meters) deep. Other attractions include Huleia and Kilauea Point national wildlife refuges, Russian Fort Elizabeth State Historical Park (built 1816), and Kilauea Lighthouse, which contains the world’s largest (although now inactive) lighthouse clamshell lens. Kauai is home to three properties of the National Tropical Botanical Garden, chartered by the U.S. Congress in 1964: Limahuli Garden and Preserve, on the north shore, and Allerton Garden and McBryde Garden, located along the southern shore. The island’s lush vegetation and fine beaches have made it a setting for numerous films and television shows.

Tourism is Kauaʻi’s largest industry. In 2007, 1,271,000 people visited Kauaʻi. The two largest groups were from the continental United States (84% of all visitors) and Japan (3%). In terms of income, the various sectors that constitute the visitors’ industry accounted for one-third of Kauaʻi’s income. Employment is dominated by small businesses, with 87% of all non-farm businesses having fewer than 20 employees. Kauaʻi’s poverty rate was 10.5%, compared to the contiguous 48 states at 10.7%. Land in Kauaʻi is very fertile; farmers raise many varieties of fruit and other crops. Guava, coffee, sugarcane, mango, banana, papaya, avocado, star fruit, kava, noni, and pineapple are all cultivated on the island.

Kauai is a nature lover’s paradise with dozens of hiking trails to explore and countless beaches to discover. The Na Pali Coast, Waimea Canyon, Wailua Falls, Wailua River, Fern Grotto, Sleeping Giant, and Hanalei Valley are just a few of the places waiting to be explored. The island of Kauaʻi has been featured in more than seventy Hollywood movies and television shows.