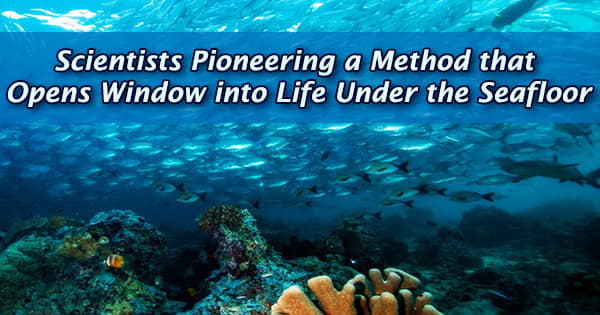 Scientists may be able to comprehend life in the toughest of settings thanks to a new study. Microorganisms from an underwater mountain in the Atlantic Ocean were investigated by scientists from Bigelow Laboratory for Ocean Sciences, who pioneered a method that might provide fresh light on how life survives deep beneath the sea or in space.

One of the biggest areas on Earth capable of supporting life is the crustal rock beneath the ocean bottom. Microorganisms that affect global-scale nutrition cycles are found inside the pores and cracks of rocks. Now, scientists have created and proven a novel way for studying them. They just published their findings in mBio, the American Society of Microbiology’s online publication.

“Most microbial life on Earth is in the subsurface,” said Senior Research Scientist Beth Orcutt, the senior author on the paper. “You have to look at the subsurface to comprehend how life has developed on Earth over millennia, and how creatures have endured for millennia.”

There’s more water deep below the bottom of the ocean, beneath thousands of feet of saltwater and even the solid ocean crust that makes up the seabed. The biggest aquifer on the planet is formed by water seeping into the crust. This sub-seafloor system accounts for 2% of the ocean’s volume and is thought to be home to a huge quantity of microbial life, according to experts.

Microbes from the Atlantis Massif, a 2.5-mile-high undersea mountain on the Mid-Atlantic Ridge, were studied. Life is hypothesized to exist on other planets and moons, such as Europa and Enceladus, in this area. On the crest of the Atlantis Massif lies an area is known as Lost City, which is teeming with life because to the activity of hydrothermal vents. These systems are being studied by NASA and other organizations as a model for the beginning of life and how organisms survive in hostile settings.

Scientists have spent decades researching how and where microorganisms survive and even thrive in the deepest parts of the seas, far from the sun. The majority of that research has concentrated on marine sediments, which are densely packed muck and debris that may stretch for kilometers beneath the surface. But there’s also the crust itself, which is made out of volcanic rock.

It’s considerably more difficult to access and study life in such rocks, and samples are sparse. Away from Lost City’s bustling ecology, life persists in the rock. Microbes are dispersed in low densities there, making it difficult to examine them by looking at a few rock samples at a time.

“Even though there is low biomass in crustal rock, its sheer volume makes it one of the most significant biological habitats of the planet,” said lead author Jacqueline Goordial, who completed the research as a postdoctoral scientist at Bigelow Laboratory.

Researchers used to investigate microorganisms by chemically extracting them from rock samples. However, when there is a low quantity of life, this approach might be troublesome and difficult to implement. As a result, the team devised a new strategy.

The researchers developed a method employing flow cytometry in collaboration with the Single Cell Genomics Center and the Center for Aquatic Cytometry, all of which are part of Bigelow Laboratory. Researchers may use flow cytometry to analyze and classify cells rapidly and correctly. It also allows researchers to analyze a cell’s genetic information, which opens up a whole new universe of research possibilities.

“This approach provides a way to access the genomes of organisms that are very difficult to study,” said Goordial, now an assistant professor at the University of Guelph. “It’s huge to be able to reach low-biomass locations! It has the potential to teach us about the nature of microbial life on our planet, as well as address fundamental concerns about how they survive and consume.”

Microbes were examined in crustal rocks dug up to 50 feet beneath the ocean’s surface. They discovered that the Atlantis Massif ecosystem was unique from the Lost City hydrothermal vents but comparable to other similar environments. This indicated that, while the system is uncommon for our planet, it is not unique. The bacteria appear to rely on carbon from saltwater to thrive, similar to creatures that dwell at the ocean’s bottom.

Furthermore, certain microorganisms may be able to generate energy from carbon monoxide. The findings suggest that the novel approach might be beneficial in researching other settings with few microorganisms, such as permafrost, other deep-sea sites, or perhaps other planets.

“We’re demonstrating methods that could be used for samples taken by a NASA rover that can only collect a couple of tiny fragments,” Orcutt said. “We are pushing the limits of how you would look for life in those places.”