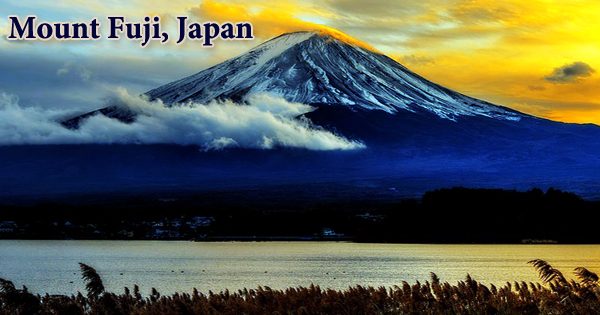 Mount Fuji (富士山, Fujisan, Japanese: ɸɯꜜ(d)ʑisaɴ), Japanese Fuji-san, also called Fujiyama or Fuji no Yama, located on the island of Honshū, is the highest mountain in Japan, standing 3,776.24 m (12,389.2 ft). It is a national symbol of Japan, contributing to the country’s physical, cultural, and spiritual topography. It reaches a height of 12,388 feet (3,776 meters) near the Pacific Ocean coast in central Honshu’s Yamanashi and Shizuoka ken (prefectures), about 60 miles (100 kilometers) west of the Tokyo-Yokohama metropolitan area. It is Asia’s second-highest volcano (after Mount Kerinci on the Indonesian island of Sumatra) and the world’s seventh-highest island peak.

It is a live volcano that sits on a tectonic “triple junction” where the Amurian plate (connected with the Eurasian tectonic plate), the Okhotsk plate (related with the North American plate), and the Filipino plate all intersect beneath Mount Fuji. On clear days, the peak can be seen from around 100 kilometers (62 miles) southwest of Tokyo. In fact, volcanic ash landed on Tokyo the last time Mount Fuji erupted, in 1707. Mount Fuji’s remarkably symmetrical cone, which is covered in snow for nearly five months of the year, is a popular tourist destination and is frequently portrayed in art and photography.

Mount Fuji, which stands at the highest point among Japan’s domestic single-peak mountains, is a popular tourist destination and a symbol of the country around the world. In fact, it attracts over 300,000 mountaineers each year. On June 22, 2013, it was inscribed as a Cultural Site on the UNESCO World Heritage List. According to UNESCO, Mount Fuji has “inspired artists and poets and been the object of pilgrimage for centuries.” It is the most visited tourist attraction in Japan, attracting both Japanese and foreign visitors. Every year, about 200,000 people attempt to reach the peak, usually during the summer months.

The name of the mountain’s origin is unknown. Fuji no Yama initially occurs in Hitachi no kuni fudoki (713 CE), an early government record, as Fuji no Yama. One of the many ideas concerning the name’s origins is that it comes from an Ainu word for “fire” combined with san, the Japanese word for “mountain.” Early folk etymology claims that Fuji came from 不二 (not + two), meaning without equal or nonpareil. Fuji is currently written in Chinese ideograms (kanji), which convey a sense of good fortune or well-being. In English, the mountain is known as Mount Fuji. Some sources refer to it as “Fuji-san”, “Fujiyama” or, redundantly, “Mt. Fujiyama.”

Many people begin their ascent of Mount Fuji at night in order to catch a glimpse of the dawn from the peak. After all, Japan is known as “the Land of the Rising Sun.” Goraiko is the name given to the dawn from Mount Fuji. The mountain has been mentioned in Japanese literature throughout the ages, and many poems have been written about it. Since ancient times, the top has been considered sacred, and women were not allowed to visit until the Meiji era in the late 1860s. The base of the mountain, near the present-day village of Gotemba, was used by ancient samurai as a distant training ground.

The phenomenon is known as “Red Fuji” happens when the mountain glows vivid red at sunrise and dusk. Normally, the contrast of the blue mountain range’s peak being coated in white snow amazes visitors to Mount Fuji. It takes on a scarlet color of breathtaking beauty when specific conditions are met. Between late summer and early autumn, numerous conditions come together to make this possible, including clean air and red-reflecting altostratus clouds. Today, Mount Fuji is an international destination for tourism and mountain climbing.

According to a popular Japanese proverb, a sensible person will climb Mt. Fuji once in their lifetime, but only a fool will do so twice. It continues to be a popular icon in Japanese culture, featuring in a number of films, inspired the Infiniti logo, and even appearing in medicine as the Mount Fuji sign. Mount Fuji takes on a variety of appearances depending on the time of year and season. Aside from the Red Fuji, the mountain has other unique landscapes with unusual names.

There is a period during both sunset and sunrise when the sun is perfectly dancing on Mount Fuji’s summit. This is known as “Diamond Fuji” because it resembles a diamond. Pearl Fuji is the name given to the full moon that sits on Mt. Fuji’s summit. Compared to Diamond Fuji’s sun’s dazzling brilliance, Peal Fuji’s calm moonlight has a soothing radiance, similar to that of a pearl. On June 22, 2013, Mount Fuji was inscribed as a Cultural Site on the UNESCO World Heritage List. However, the inscription sparked debate after two professors at Shizuoka’s Mt. Fuji World Heritage Centre were forced to resign in March 2018 due to academic and racial harassment by Shizuoka prefecture government officials.

There is a strong sense of personal association with the mountain among the Japanese, and thousands of Japanese climb to the shrine at the summit each summer. Its image has been repeated numerous times in Japanese art, perhaps none more famously than Hokusai’s Thirty-six Views of Mount Fuji series of woodblock prints, which were first published between 1826 and 1833. Since at least the 7th century, Shinto practitioners have revered Mount Fuji as a sacred spot. Shinto is Japan’s original religion or spirituality. Mount Fuji’s base and ascent are dotted with Shinto temples. Shinto shrines are dedicated to the Shinto faith’s supernatural deities, known as kami. Princess Konohanasakuya, whose symbol is the cherry blossom, is Mount Fuji’s kami.

Mount Fuji’s elevation is 3,776 meters; however, the term “station” is typically used to describe the mountain trails, which divide the journey into ten steps to the summit. An earthquake, according to legend, produced the volcano in 286 BCE. The truth is a little more complicated. Fuji’s age is debated, but it appears to have formed over the last 2.6 million years on a base that dates back up to 65 million years; the earliest eruptions and peaks occurred around 600,000 years ago. The mountain is part of the Fuji-Hakone-Izu National Park. When the sky is clear, it may be seen from Yokohama, Tokyo, and sometimes as far as Chiba, Saitama, Tochigi, Ibaraki, and Lake Hamana.

The climate at Mount Fuji’s top is tundra (Köppen climatic classification ET). At such a high height, the climate is quite cold, and the cone is covered in snow for several months of the year. The present-day mountain is a composite of three successive volcanoes: at the bottom is Komitake, which was surmounted by Ko Fuji (“Old Fuji”) and, finally, by the most recent, Shin Fuji (“New Fuji”). The lava and other ejecta from Ko Fuji covered most of Komitake over millennia, yet the peak of the latter’s cone continued to emerge from Ko Fuji’s slope. Shin Fuji is thought to have originally erupted some 10,000 years ago and has continued to smolder or erupt on occasion ever since.

Mount Fuji is known as “Front Fuji” when viewed from Suruga Bay in Shizuoka Prefecture’s central region, and “Back Fuji” when viewed from the Fuji Five Lakes. Historically, it appears that the southern foot of the mountain was considered the “front,” while the northern foot was considered the “back.” Mt. Fuji’s main crater is 780 meters (2,560 ft) in diameter and 240 meters (790 ft) in depth. The crater’s floor is 100–130 meters (330–430 feet) in diameter. The angle of repose for dry gravel is 31°–35° from the crater to a distance of 1.5–2 kilometers (0.93–1.24 mi). Slope angles beyond this distance are around 27°, which is driven by a rise of scoria. In the piedmont, mid-flank slope angles drop from 23° to less than 10°.

The Fuji Volcanic Zone, which stretches northward from the Mariana Islands and the Izu Islands through the Izu Peninsula to northern Honshu, includes the mountain. Scientists have discovered four separate stages of volcanic activity during Mount Fuji’s development. Approximately 100,000 years ago, “Old Fuji” was formed over the top of Komitake Fuji. Around 10,000 years ago, the contemporary “New Fuji” is thought to have formed on top of Old Fuji. The area’s tourism industry is well-developed, with Lake Yamanaka (at 2.5 square miles (6.4 square kilometers)) serving as the focal point of the most popular resort area. The wooded volcanic Hakone region, southeast of Mount Fuji, is famous for its hot spring resorts at Yumoto and Gōra.