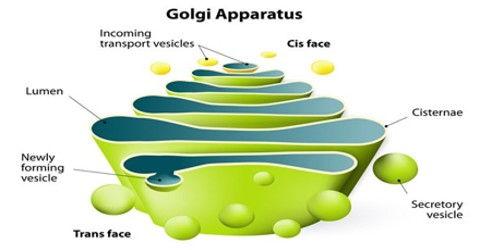 The Golgi apparatus is like the post office or shipping and receiving department of a cell. It is a cellular organelle that packages and sorts proteins and other molecules before they are sent to their final destination. It was identified by an Italian physician named Camillo Golgi, hence the name. It also called Golgi complex or Golgi body. The Golgi apparatus is responsible for transporting, modifying, and packaging proteins and lipids into vesicles for delivery to targeted destinations. It is located in the cytoplasm next to the endoplasmic reticulum and near the cell nucleus. While many types of cells contain only one or several Golgi apparatus, plant cells can contain hundreds. It is of particular importance in processing proteins for secretion, containing a set of glycosylation enzymes that attach various sugar monomers to proteins as the proteins move through the apparatus.

Structure and Function of Golgi apparatus

Golgi apparatus has a structure that is made up of cisternae, which are flattened stacks of membrane usually found in a series of five to eight. These cisternae help proteins travel from different points in the cell using enzymes. In order to modify a macromolecule, cisternae’s enzymes need the addition of carbohydrates and phosphates to properly label each protein for its ultimate destination. These carbohydrates and phosphates are received by the Golgi apparatus through nucleotide sugars delivered to the organelle from the cytosol. According to the vesicular transport model, there are a variety of compartments located between the cis, essentially the beginning of the Golgi apparatus, and the trans, the end. These compartments shuttle along the macromolecules from section to section using membrane-bound carriers. The cisternal maturation model states that the vesicles fuse to each other at the cis face of the Golgi apparatus and are essentially pushed along as new vesicles fuse together behind them. Other functions of the Golgi apparatus include the production of glycosaminoglycans, which go on to form parts of connective tissues. The Golgi will use a xylose link to polymerize the glycosaminoglycans onto proteins to form proteoglycan. It then performs sulfation onto the proteoglycans in order to aid in signaling abilities and giving the molecule a negative charge.

The Bcl-2 genes that are located within the Golgi apparatus also play a significant role in preventing apoptosis, or the destruction of the cell.

Brefeldin A (BFA) is a fungal metabolite used experimentally to disrupt the secretion pathway as a method of testing Golgi function. BFA blocks the activation of some ADP-ribosylation factors (ARFs). ARFs are small GTPases which regulate vesicular trafficking through the binding of COPs to endosomes and the Golgi. BFA inhibits the function of several guanine nucleotide exchange factors (GEFs) that mediate GTP-binding of ARFs. Treatment of cells with BFA thus disrupts the secretion pathway, promoting disassembly of the Golgi apparatus and distributing Golgi proteins to the endosomes and ER.