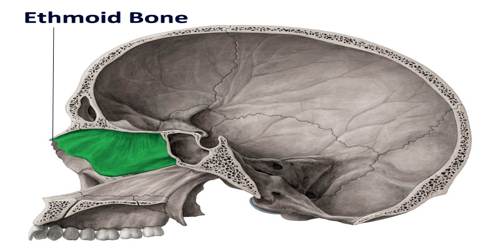 Ethmoid bone is exceedingly light and spongy bone that provides the floor of the front part of the skull and the roof of the nose. The ethmoid bone consists of two masses of thin plates enclosing air cells and looks like a sieve. It is roughly the size and shape of an ice cube, but is only a fraction as heavy. It is located between the orbits, centered on the midline. The ethmoid bone is one of the bones that make up the orbit of the eye.

It articulates with thirteen bones: the frontal, sphenoid, nasals, maxillae, lacrimals, palatines, inferior nasal conchae, and vomer. The ethmoid is virtually never found as a unit because of its fragility. It is best viewed in a specially disarticulated skull, where its complexity can be appreciated. 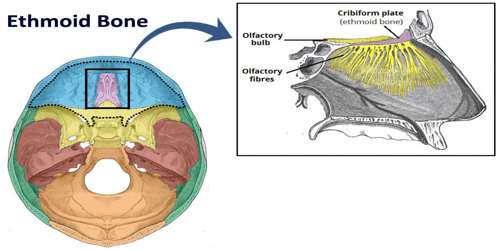 There are 206 separate bones in the human body. Collectively they form the skeletal system, a structure bound together by ligaments at the joints and set in motion by the muscles, which are secured to the bones by means of tendons. Bones, ligaments, muscles, and tendons are the tissues of the body responsible for supporting and moving the body.

Some bones have a chiefly protective function. An example is the skull, which encloses the brain, the back of the eyeball, and the inner ear. Some, such as the pelvis, are mainly supporting structures. Other bones, such as the jaw and the bones of the fingers are concerned chiefly with movement. The bone marrow in the center manufactures blood cells.

Structure and Functions of Ethmoid Bone

Ethmoid bone is one of the 8 bones of the cranium. It is situated at the roof of the nasal cavity, and between the two orbital cavities. It contributes to the medial wall of the orbit and forms part of the anterior cranial fossa, where it separates the nasal cavity (inferiorly) from the cranial cavity (superiorly). It also forms a significant portion of the nasal septum and lateral nasal wall.

The ethmoid bone is made up of three parts – the cribriform plate, the perpendicular plate and the ethmoidal labyrinth. 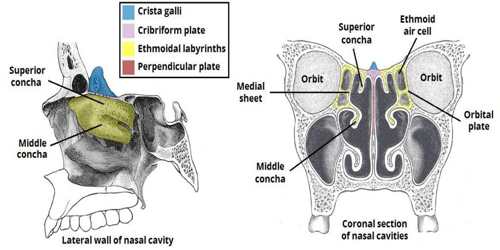 The cribriform plate forms the roof of the nasal cavity. It is pierced by numerous olfactory nerve fibres, which gives it a sieve-like structure. Projecting superiorly from the cribriform plate is the crista galli, which provides an attachment point for the falx cerebri (sheet of dura mater that separates the two cerebral hemispheres).

Another projection of bone descends from the cribriform plate – the perpendicular plate. It forms the superior two-thirds of the nasal septum.

Lastly, the ethmoid bone contains two ethmoidal labyrinths. These are large masses located at either side of the perpendicular plate, which contain the ethmoidal air cells (sinuses).

The ethmoid articulates with thirteen bones:

Portions of the ethmoid bone also form sections of the cranial floor, eye sockets, and nasal cavity walls. A perpendicular plate projects downward in the middle from the cribriform plates to form the bulk of the nasal septum. Delicate scroll-shaped plates called superior and middle nasal conchae project inward from the sides of the ethmoid bone toward the perpendicular plate. These bones, which are called the turbinate bones, support mucous membranes that line the nasal cavity.

The ethmoid bone can be fractured in cases of facial trauma – most commonly hitting the dashboard in a collision, or a fall from height. Some signs and symptoms of fracture are related to the anatomy of the ethmoid bone:

Fracture of cribriform plate – branches of the olfactory bulb may be sheared. This may cause anosmia (loss of sense of smell).

Fracture of the labyrinth – may allow communication between the nasal cavity and the orbit. It is then possible for air to enter the orbit and cause orbital emphysema.

How Mitochondrial DNA Enters our Genomes