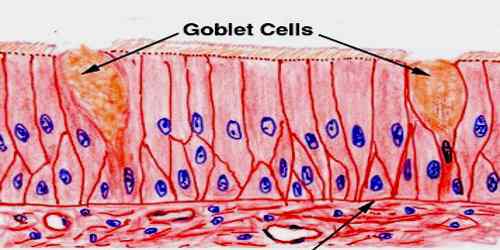 Goblet cells are any of the specialized epithelial cells, such as those found in the mucous membrane of the stomach, intestines, and respiratory passages, that secrete mucus. The goblet cells distend with mucin before secretion and collapse to a goblet shape after secretion. The goblet cells mainly use the merocrine method of secretion, secreting vesicles into a duct, but may use apocrine methods, budding off their secretions, when under stress. 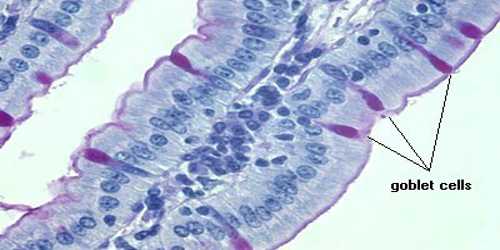 Goblet cells are glandular and simple columnar cells present in the epithelia of most organisms. The name of goblet cells comes from their “goblet-like shape after they collapse following mucin secretion.

But regardless whether they accumulate mucus or not, the shape of goblet cells are dependent on their age. Young cells are rounded but increase in size and flatten as they age.

Structure and Functions of Goblet Cell

Goblets cells have a very prominent morphology; having the nucleus, mitochondria, Golgi body, and the endoplasmic reticulum at the basal portion of the cell. The rest of the cell is filled with mucus in secretory granules.

When fixed, these cells appear to have a narrow base and expanded apical portion that extends up to the lumen.

Goblet cells are found in all wet-surfaced epithelia such as the respiratory, gastrointestinal, and reproductive tracts, and the conjunctiva and are surrounded by stratified squamous epithelial cells. Goblet cells of the respiratory, gastrointestinal, and reproductive tracts have been extensively studied with regard to secretion and proliferation in healthy and diseased states. Conjunctival goblet cells have not been studied as extensively, but much information is available. The purpose of this article is to examine the current knowledge of conjunctival goblet cells. 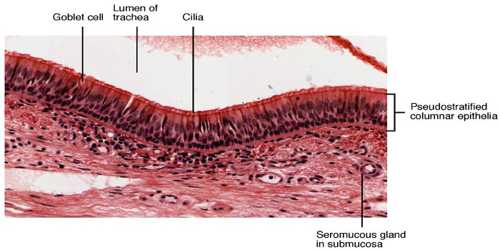 The main role of goblet cells is to secrete mucus in order to protect the mucous membranes where they are found. Apart from comprising the epithelial lining of various organs, production of large glycoproteins and carbohydrates, the most important function of goblet cells is the secretion of mucus. This mucus is a gel-like substance that is composed mainly of mucins, glycoproteins, and carbohydrates.

Goblet cell carcinoids are a class of rare tumors that form as a result of an excessive proliferation of both goblet and neuroendocrine cells. The majority of these tumors arises in the appendix and may present symptoms similar to the much more common acute appendicitis. The main treatment for localized goblet cells tumors is removal of the appendix, and sometimes removal of the right hemicolon is also performed. Disseminated tumors may require treatment with chemotherapy in addition to surgery.