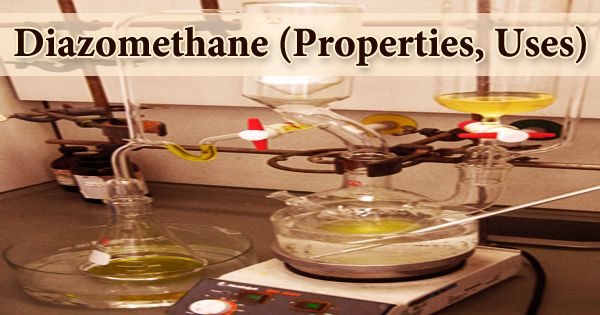 Diazomethane (CH2N2) is a yellow gas with a musty odor that is delivered as a liquid under pressure and is extremely hazardous when inhaled. Concentrated diazomethane solutions are extremely hazardous, and they can cause explosions. Diazomethane releases harmful nitrogen oxide fumes when heated; the toxic emissions are also unaffected by its disintegration. Hans von Pechmann, a German scientist, developed it in 1894. It’s the most basic diazo compound. It is an exceedingly sensitive explosive yellow gas in its pure form at ambient temperature; as a result, it is nearly universally utilized as a solution in diethyl ether.

After being prepared in ether or ether with traces of ethanol, diazomethane is employed. Other solvents, such as dichloromethane, are rarely manufactured and applied to it. In its annotation, diazomethane is linked to hydrogen cyanide and formaldehyde. In the laboratory, the chemical is a popular methylating agent, but it is too dangerous to use on a large scale without particular precautions. The advent of the safer and comparable chemical trimethylsilyldiazomethane has considerably reduced the use of diazomethane.

The simplest diazo compound is diazomethane, which has a diazo group connected to a methylene group. It functions as an alkylating agent, as well as an antineoplastic, carcinogenic, and poisonous agent. Diazomethane can be manufactured from an alkali (potassium carbonate or potassium hydroxide) reaction with N-Nitrosomethyl-P-Toluenesulfonamide. It can also be made from diazomethane ether solutions by reacting N-nitroso-beta-methylaminoisobutyl methyl ketone with sodium isopropoxide in isopropanol and ether.

Occupational exposure is the most common source of diazomethane exposure. It is a powerful irritant to the respiratory system. Humans who are exposed to diazomethane inhalation for a short period of time may have eye irritation, cough, wheezing, asthmatic symptoms, pulmonary edema, pneumonia, disorientation, weakness, headaches, and chest pains. Diazomethane decomposes violently in the heat. Above 200°C. the vapors may explode violently if rough glass surfaces are present.

If there are traces of organic stuff present, low-temperature explosions can occur. With alkali metals, it causes explosions. Produces nitrogen and solid white polymethylene when it reacts with copper powder and, to a lesser extent, all solid surfaces. Reacts with dimethylaminodimethylarsine and trimethyltin in ether with vigorous foaming. The hydrolysis of an ethereal solution of an N-methyl nitrosamide with aqueous base yields diazomethane. N-nitroso-N-methylurea is the classic precursor, but it is unstable, so compounds like N-methyl-N’-nitro-N-nitrosoguanidine (MNNG) and N-methyl-N-nitroso-p-toluenesulfonamide (Diazald) are currently favored.

There is no information on diazomethane’s long-term (chronic), reproductive, developmental, or carcinogenic effects in humans. Inhalation and cutaneous exposure of rats and mice to diazomethane resulted in an increase in the incidence of lung cancers. Diazomethane has not been classified by the EPA in terms of its possible carcinogenicity. Coughing, wheezing, and headaches have been reported in people who have been exposed to trace amounts of this drug. Poisoning has been documented in a large number of cases. Its toxicity is likely due to its great methylating ability.

When heated to 100°C or placed on abrasive glass surfaces, gaseous diazomethane can explode. Glass stirrers with glass sleeve bearings, as well as ground glass apparatus, should not be used. The gas and liquid forms of pure diazomethane are highly combustible and can easily explode. Contact with rough surfaces such as ground-glass joints, etched or scratched flasks, and glass tubing that has not been adequately fire-polished have all been recorded to trigger diazomethane explosions.

Direct sunshine and bright artificial light can both cause this chemical to explode. When diazomethane is exposed to alkali metals, violent reactions can occur. At low temperatures, such solutions disintegrate slowly. If alcohols or water are present, decomposition is accelerated. Copper powder undergoes active breakdown, resulting in the creation of insoluble white polymethylene flakes and the evolution of nitrogen. Boiling stones or solid calcium chloride have the same effect.

One of two methods for determining CH2N2 concentration is available. An excess of benzoic acid in cold Et2O can be used to cure it. Diazomethane has a molecular weight of 42.041 g/mol and a monoisotopic mass of 42.022 g/mol, which also happens to be its precise mass. It has a musty odor and is delivered in compressed gas form. It has a melting point of -2290 F or -1450 C and a boiling point of -90 F or -230 C at 760 mm Hg. The stable chemical cyanamide is an isomer of diazomethane, with carbodiimide as its minor tautomer. The cyclic 3H-diazirine and isocyanoamine (isodiazomethane) are diazomethane isomers that are less stable but nonetheless isolable.

Acidic substances such as carboxylic acids, phenols, and enols are methylated using diazomethane. Copper powder affects the breakdown of diazomethane, causing nitrogen to escape and the formation of polymethylene’s insoluble white flakes. Diazomethane is always produced as a solution in ether and utilized as such for safety and convenience. Carboxylic acids are converted to methyl esters, and phenols are converted to methyl ethers. Diazomethane is also utilized as a methylating agent in chemical synthesis to methylate acidic substances like carboxylic acids and phenols. It’s utilized to methylate chlorophenoxy acid pesticides in trace environmental analysis.

Diazomethane and homologues are utilized in Arndt-Eistert synthesis and the Büchner-Curtius-Schlotterbeck homologation reaction in more specialized applications. Diazomethane is not manufactured for distribution or sale due to its toxicity and explosive nature. It is manufactured and employed in situ when used as a methylating agent in the laboratory. As a result, no information on technical goods and contaminants is provided. In the laboratory, diazomethane is made by reacting alkali with N-methyl-N-nitroso-N’-nitroguanidine, which is readily available.

Diazomethane is an extremely potent allergen. Long-term or repetitive exposure to diazomethane can produce skin and lung sensitization, resulting in asthma-like symptoms or fever as a result of exposure to diazomethane concentrations that previously caused no symptoms. When heated above 100°C, exposed to bright light, alkali metals, or calcium sulfate, the chemical explodes. While utilizing this combination, it is highly recommended that you use a blast shield. Diazomethane solutions should not be stored (even at low temperatures). All diazomethane work should be done in a fume hood with a safety shield, and impermeable gloves, protective gear, and safety eyewear should all be used at all times.