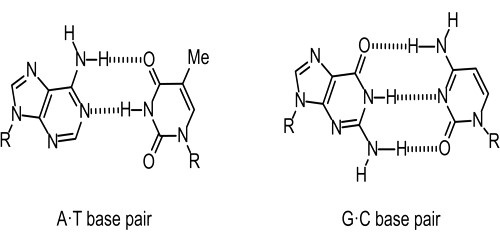 In molecular biology, two nucleotides on opposite complementary DNA strands that are connected by hydrogen bonds are called a base pair (often abbreviated bp). These are found in double-stranded DNA and RNA, where the bonds between them connect the two strands, making the double-stranded structures possible. The base pairs are adenine-thymine and guanine-cytosine in DNA, and adenine-uracil and guanine-cytosine in RNA. It is a pair of bases consisting of the pyrimidine base of one nucleotide joined by a hydrogen bond to the complementary purine base of another nucleotide. Base pairs may be thought of as the rungs of the DNA ladder. Many DNA-binding proteins can recognize specific base-pairing patterns that identify particular regulatory regions of genes. 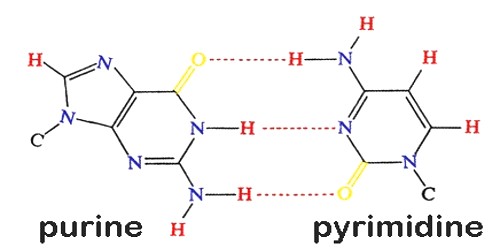 In DNA pairing, adenine (A) forms a base pair with thymine (T), to form an A/T base pair. Guanine (G) pairs with cytosine (C) in DNA, to form a G/C base pair. The size of an individual gene or an organism’s entire genome is often measured in base pairs because DNA is usually double-stranded. Common Definition: “Two DNA bases that are complementary to one another (A and T, or G and C) and join in strands to form the double-helix that is characteristic of DNA.” These often are used to measure the size of an individual gene within a DNA molecule. The human genome, for example, is made up of an estimated three billion base pairs, with about 20,000 to 25,000 distinct genes.