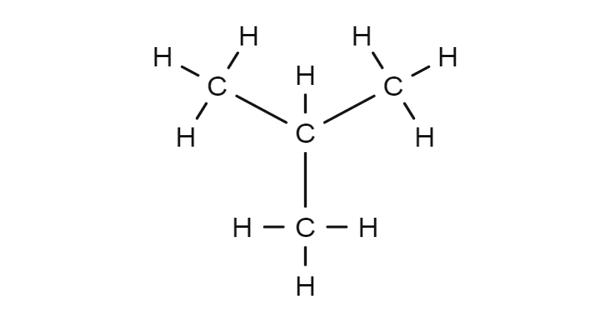 Isobutane, also known as i-butane, 2-methylpropane or methylpropane, is a chemical compound with molecular formula HC(CH3)3. It is a colorless gas with a faint petroleum-like odor. It is an isomer of butane. Isobutane is a colourless, odourless gas. It is shipped as a liquefied gas under its vapor pressure. It is the simplest alkane with a tertiary carbon. It is an alkane that is propane substituted by a methyl group at position 2.

Isobutane is used as a precursor molecule in the petrochemical industry, for example in the synthesis of isooctane. It has a role as a food propellant and a refrigerant. It is a highly demanded chemical in the refinery industry for the production of alkylates, and methyl tert-butyl ether (MTBE), both important additives for reformulated gasolines.

The component atoms are the same but are arranged in a different geometric structure. This isomerization happens in something called a butamer unit and includes the use of platinum or another metal catalyst.

Isobutane is the principal feedstock in alkylation units of refineries. It is indeed a raw material for the production of MTBE, synthetic rubber, and many other organic products. Using isobutane, gasoline-grade “blendstocks” are generated with high branching for good combustion characteristics. Typical products from isobutane are 2,4-dimethylpentane and especially 2,2,4-trimethylpentane. It is used to make isooctane, a high octane gasoline component, which increases the octane rating and anti-knock properties of gasoline.

Contact with the liquid can cause frostbite. It is easily ignited. It is very flammable and gas/air mixtures can be explosive. The vapors are heavier than air.