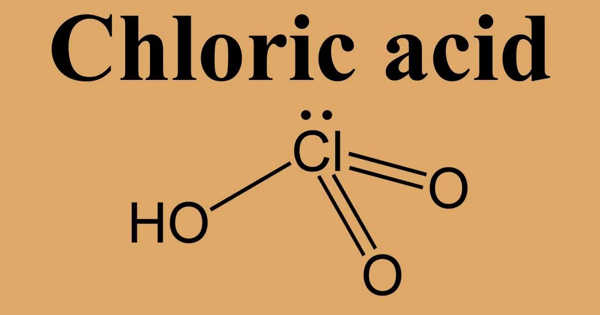 Chloric Acid – an Oxoacid of Chlorine

Chloric Acid, HClO3, is an oxoacid of chlorine, and the formal precursor of chlorate salts. It is an inorganic acid used as a reagent and reactive to prepare some chlorate salts and other chemical products. It is a strong acid (pKa ≈ −2.7) an oxidizing agent. It is a colorless liquid. It will accelerate the burning of combustible materials and can ignite most on contact.

Chloric acid is thermodynamically unstable with respect to disproportionation. It is a colorless liquid. Its density is 1 g mL-1. It is soluble in water. It is an oxidant and corrosive.

Chloric acid is stable in cold aqueous solution up to a concentration of approximately 30%, and a solution of up to 40% can be prepared by careful evaporation under reduced pressure. Above these concentrations, chloric acid solutions decompose to give a variety of products, for example:

It can be prepared by the reaction of sulfuric acid with barium chlorate, the insoluble barium sulfate being removed by precipitation:

Another method is the heating of hypochlorous acid, producing chloric acid and hydrogen chloride:

Chloric acid is used to prepare chloride salts and other chlorine species. It is used as a reagent in chemical analysis and to make other chemicals. It is also an oxidizer agent.

Chloric acid is a powerful oxidizing agent. Due to its oxidizer characteristic, it should be used very carefully and must avoid contact with other chemical compounds that can react easily. Most organics and flammables will deflagrate on contact. Chloric acid is a strong acid, thus it can cause severe eyes and skin damage.