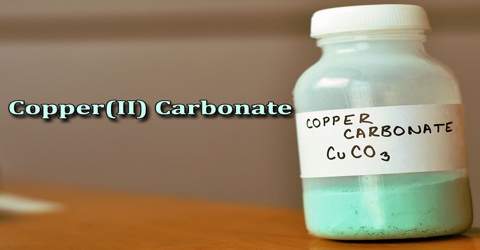 Copper(II) carbonate is a compound, CuCO3, that was used as a sulfide scavenger for water-base muds. It was found to be corrosive due to spontaneous plating of metallic copper onto metal surfaces, causing pitting corrosion; it has largely been replaced by zinc compounds. At ambient temperatures, is an ionic solid (a salt) consisting of copper(II) cations Cu2+ and carbonate anions CO2−3. Copper Carbonate has a fairly complex decomposition. The accompanying curve shows the history of weight loss as this material is fired. It is interesting to compare this chart with the one for Copper Hydroxide to see the difference in the amount of weight lost, and when and how fast it occurs.

Elements and Properties of Copper(II) Carbonate

The formula of the carbonate anion: CO32−

The charge of the carbonate anion: 2−

This means that the copper 2+ ion and the carbonate ion can balance out as a compound. Copper carbonate is bulkier than the oxide form, thus it tends to disperse better to give more even results. It is also more reactive chemically and thus melts better. It produces gases as it decomposes and these can cause pinholes or blisters in glazes. Also the carbonate form contains less copper per gram, therefore colors are less intense than the oxide form. The stability of dry CuCO3 depends critically on the partial pressure of carbon dioxide (pCO2). It is stable for months in dry air, but should actually decompose slowly into CuO and CO2 if pCO2 is less than 0.11 atm.

Copper carbonate has a number of uses across a wide variety of industries and products.