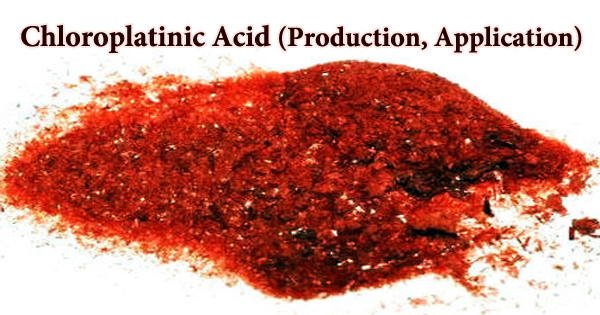 Chloroplatinic acid (sometimes called hexachloroplatinic acid) is a reddish-brown solid that is water-soluble and produces a moderately acidic solution. It has the formula (H3O)2(PtCl6)(H2O)× (0 ≤ × ≤ 6) and is an inorganic chemical. Chloroplatinic acid may make people sick if they inhale it, and it’s also irritating to their skin and eyes. This acid can break down into hazardous chloride fumes when heated to high temperatures.

It’s a red solid that’s a major commercial source of platinum, generally in the form of an aqueous solution. It may burn, although ignition may be difficult. It’s utilized in the production of indelible ink and electroplating. The hydronium (H3O+) salt of the hexachloroplatinate anion (PtCl2−6) is commonly represented in shorthand as H2PtCl6. Chloroplatinic acid is used to make indelible ink and in electroplating operations, and it may burn but is difficult to ignite.

Chloroplatinic acid crystallizes as reddish-brown deliquescent (moisture-absorbing) crystals with a specific gravity of 2.43 and a melting point of 60 °C (140 °F) from the solution. It can be created in a variety of ways. Dissolution of platinum in aqua regia is the most frequent of these techniques. Other techniques include electrolysis or exposing an aqueous solution of platinum particles to chlorine gas.

With the emission of hydrogen ions, oxidizing acids are typically soluble in water. The pH of the resultant solutions is less than 7.0. Chemical bases (such as amines and inorganic hydroxides) react with materials in this group to create salts. The base absorbs hydrogen ions that the acid contributes in these neutralizing processes. The following equation is hypothesized to occur when hexachloroplatinic acid is generated using the aqua regia method.:

In confined areas, neutralizations can create dangerously high levels of heat. Acids may create a lot of heat when they dissolve in water or when their strong solutions are diluted with water. The addition of water acids frequently creates enough heat in the tiny mixing zone to cause part of the water to boil explosively. When the orange/red solution is evaporated, brownish-red crystals are formed.

Some writers believe that nitrosonium hexachloroplatinate is present in the hexachloroplatinic acid generated using this technique. It is the raw material for most platinum compounds, as well as a component of platinum plating baths. If this chemical comes into touch with your skin, flush it with water right away. If this chemical gets into your clothes, take them off right away and wash your skin with water. Seek medical help as soon as possible.

Materials in this category, like other acids, can cause polymerization in certain organic compounds. When they react with cyanide salts and compounds, gaseous hydrogen cyanide is produced. Dithiocarbamates, isocyanates, mercaptans, nitrides, nitriles, sulfides, and weak or strong reducing agents are often used to produce flammable and/or poisonous gases. Newer research suggests that this is not the case, and that samples generated using this approach contain no identifiable nitrogen once the nitric acid has been removed.

Alternative approaches have been researched and reported, with the goal of avoiding nitrogen pollution in many cases. Sulfites, nitrites, thiosulfates (to produce H2S and SO3), dithionites (SO2), and even carbonates can produce gas. The carbon dioxide gas produced by the last is harmless, but the heat and spattering from the reaction can be bothersome. Acids frequently catalyze (speed up) chemical processes. Hexachloroplatinic acid decomposes to platinum(IV) chloride when heated.

The material itself is non-combustible, however, it may break down when heated, producing caustic and/or poisonous gases. Some are oxidizers, which can cause combustibles to ignite (wood, paper, oil, clothing, etc.). Acids may create a lot of heat when they dissolve in water or when their strong solutions are diluted with water. The addition of water acids frequently creates enough heat in the tiny mixing zone to cause part of the water to boil explosively.

The ammonium salt becomes elemental platinum when heated in a hydrogen-rich environment. Platinum is frequently extracted from ores or recovered from waste. Dithiocarbamates, isocyanates, mercaptans, nitrides, nitriles, sulfides, and weak or strong reducing agents are often used to produce flammable and/or poisonous gases. Chloroplatinic acid is widely accepted as a precursor to the real catalyst. Colloidal platinum or zero-valent compounds have also been explored as potential candidates.