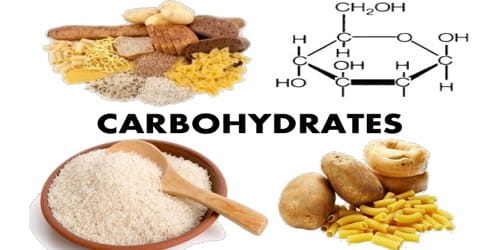 Carbohydrates are chemical compounds that contain only oxygen, hydrogen and carbon. can also be defined chemically as neutral compounds of carbon, hydrogen, and oxygen. They are a primary source of food our body uses for energy. They are made up of joined-up sugars. Sugars have the general formula Cm(H2O)n and are also known as saccharides. They are formed by green plants from carbon dioxide and water during the process of photosynthesis. They are classified into mono, di, tri, poly, and heterosaccharides.

Certain carbohydrates are an important storage and transport form of energy in most organisms, including plants and animals. Foods high in carbohydrates include bread, fruits, and vegetables, as well as milk products.

Carbohydrates are the most common source of energy for the human body. They are a major food source and a key form of energy for most organisms. Protein builds tissue and cells in the body. Carbohydrates are very good for energy, but, if a person eats more than needed, the extra is changed into fat. One gram of carbohydrate contains approximately 4 kilocalories

If necessary, humans can live without eating carbohydrates because the human body can change proteins into carbohydrates. People of some cultures eat food with very little carbohydrates, but they still remain healthy.

Research in the United States and Canada have shown that people get about 40% to 60% of their energy from carbohydrates. However, studies suggest that some people get at least 55% to 75% of energy from carbohydrates. It may depend on the amount of physical work done by people: the harder they work, the more energy they need. The other need for energy is body temperature. Living in a cold climate means a person needs more energy.

Most carbohydrates occur naturally in plant-based foods, such as grains. Some foods have high levels of carbohydrates including bread, pasta, potatoes, cereals, rice, etc.

Carbohydrate derivatives are involved in reproduction, the immune system, the development of the disease, and blood clotting.