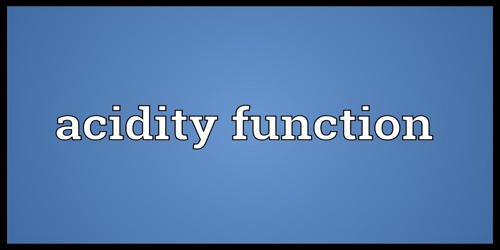 An acid is a chemical that gives off hydrogen ions in water and forms salts by combining with certain metals. Acidity is measured on a scale called the pH scale. An acidity function is a measure of the acidity of a medium or solvent system, usually expressed in terms of its ability to donate protons to (or accept protons from) a solute (Brønsted acidity). Acidity functions are not unique properties of the solvent system alone but depend on the solute with respect to which the thermodynamic tendency is measured. The pH scale is by far the most commonly used acidity function and is ideal for dilute aqueous solutions. pH is a measure of how acidic/basic water is. The range goes from 0 to 14, with 7 being neutral. Other acidity functions have been proposed for different environments, most notably the Hammett acidity function, H0, for superacid media, and its modified version H− for super-basic media. Superacids are able to dissociate completely because when they do so they give an extremely stable anion in which the residual negative charge is distributed among multiple electronegative atoms.

In dilute aqueous solution, the predominant acid species is the hydrated hydrogen ion H3O+ (or more accurately [H(OH2)n]+). In this case, H0 and H− are equivalent to pH values determined by the buffer equation or Henderson-Hasselbalch equation.

Hammett Acidity Function measurements which are based on spectrophotometry have not been carried out on BF3–HF solutions. The acid ionization constants typically used to measure weak acids’ acidity are only valid in dilute aqueous solutions. A more general measure of acidity that in principle is valid for any acid is the Hammett acidity function.

However, an H0 value of −21 (a 25% solution of SbF5 in HSO3F) does not imply a hydrogen ion concentration of 1021 mol/dm3: such a “solution” would have a density more than a hundred times greater than a neutron star. Rather, H0 = −21 implies that the reactivity (protonating power) of the solvated hydrogen ions is 1021 times greater than the reactivity of the hydrated hydrogen ions in an aqueous solution of pH 0. Acidity functions are usually established over a range of composition of such a system by UV/VIS spectrophotometric or NMR measurements of the degree of hydronation (protonation or Lewis adduct formation) for the members of a series of structurally similar indicator bases (or acids) of different strength: the best known of these functions is the Hammett acidity function H0. The actual reactive species are different in the two cases, but both can be considered to be sources of H+, i.e. Brønsted acids. The pH is usually measured with a pH meter, which translates into pH readings the difference in electromotive force (electrical potential or voltage) between suitable electrodes placed in the solution to be tested.