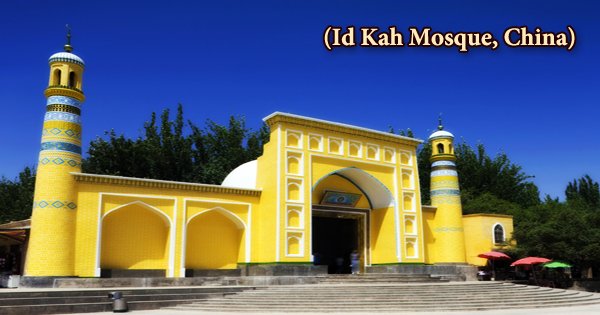 A visit to a historical place/building (Id Kah Mosque, China)

The Id Kah Mosque (Uighur: ھېيتگاھ مەسچىتى, romanized: Hëytgah Meschiti, Хейтгах Месчити; Chinese: 艾提尕尔清真寺; pinyin: Ài Tí Gǎ Ěr Qīng Zhēn Sì; from Persian: عیدگاه, Eidgāh, meaning “Place of Festivities”) is one of China’s largest mosques, and it is extremely prominent among Xinjiang’s Muslims. The mosque is located in Kashgar City, Xinjiang Uigur Autonomous Region, on the central square. It holds nearly 10,000 worshippers every Friday and can hold up to 20,000. The mosque, which covers 16,800 square meters, was designed by Saqsiz Mirza in 1442 (although it incorporated older structures dating back to 996). ‘Id Kah’ means ‘a place of praying and celebrating in festivals.’ It is China’s largest mosque, consisting of a set of old Islamic structures with distinct ethnic and religious characteristics. To honor his ancestors, Saqsiz Mirza, the elder of two sons of Amir Sayyid Ali, founded the mosque in ca. 1442 (although it incorporated older structures dating back to 996). The mosque is approximately 16,000 square meters in size. The new golden-brick construction of the mosque was constructed in 1798 to replace an older structure, and it was later extended in 1838 to its current scale. On August 9, 1933, Ma Zhancang, a Chinese Muslim general, killed and beheaded Uighur chief Timur Beg, showing his head on a spike at Id Kah mosque. The Uighur emir Abdullah Bughra was also beheaded in March 1934, and his head was displayed at the Id Kah mosque. Ma Zhongying, a Chinese Muslim general, delivered a speech at Kashgar’s Id Kah Mosque in April 1934, urging Uighurs to support the Republic of China Kuomintang government in Nanjing. In 1981, the mosque underwent renovations, and between 2004 and 2005, the mosque’s façade was tiled. Jume Tahir, the mosque’s imam at the time, was stabbed to death by extremists shortly after attending morning prayers on July 30, 2014. This location was once a graveyard, according to legend. The current Id Kah Mosque began as a small structure in 1442. It has undergone many renovations and enlargements to bring it up to date in terms of size and design.

The Mosque was established in 1442 and has a long and illustrious history. A gate tower, a courtyard, a doctrine-teaching space, and a wide Hall of Prayer are among the religious features of the building complex, which is built-in grand Islamic style. Visitors see a wide courtyard as they wind their way through the Tower Gate. There are 18 doctrine-teaching halls on the south and north sides of the courtyard. Poplar trees tower high against the blue sky in the courtyard, while pines and cypresses thrive. The yard is completely shady. The lush vegetation is encircled by a pool of crystal-clear water in the yard. The yard offers a peaceful and secluded setting for relaxation and rejuvenation. The original mosque was built during Kashgar’s golden age, between the 10th and 13th centuries, when it was one of the capitals of the Kara-Khanid Khanate. When the famous Turco-Mongol conqueror Amir Timur (Tamerlane) sacked Kashgar in the 14th century, the mosque was destroyed. Ubul Abidek enlarged the mosque in 1538, and it was later rebuilt and renovated several times in the 18th and 19th centuries. The mosque’s temple gate is made of yellow bricks, with a height of 4.7 meters, a width of 4.3 meters, and a height of around 17 meters. A crescent moon stands atop the gate tower, which has two 18-meter-high minarets constructed asymmetrically on both sides. Every day at dawn, the temple’s Imam would ascend the tower five times and call Muslims to pray. A wide arch with a minaret at the top stands behind the gate tower. The courtyard, the Hall of Prayer, and the gate tower, as well as some other attached buildings, cover a total area of 16,800 square meters (approximately 4 acres). The tiles’ yellow glaze represents the Xinjiang sun’s bright rays. The main arch is sandwiched between two tall minarets, one next to it and the other separated by two false arches. The yellow tiles are highlighted by bands of blue and green tiles on the towers. They are topped with crescent moons to indicate that the faithful can come for prayer. The main portal is circular, but it has the same arch motif as the two portals to the left. The great door’s façade is adorned with 15 miniature arches. The mosque “has lost the star-and-crescent structures that crowned its roofs, the multicolored scriptural plaque that adorned its entrance (it was transferred inside), and its congregation,” according to The Art Newspaper. 140 light blue wooden pillars support the roof of the Outer Hall. These seven-meter-tall pillars were artistically spaced in a grid pattern. Exquisite carvings and delicate paintings adorn the roof and pillars. A wide courtyard is just inside the gate, with poplar trees reaching for the sky and pines growing vigorously like boys and girls in their adolescence. Every day, between 2000 and 3000 people come to worship, with the number rising to 6000 to 7000 on Fridays. During religious festivals, the number of Muslims kneeling in prayer around the mosque will exceed 40,000 or more. Non-Muslims are allowed to enter, but not during prayer.