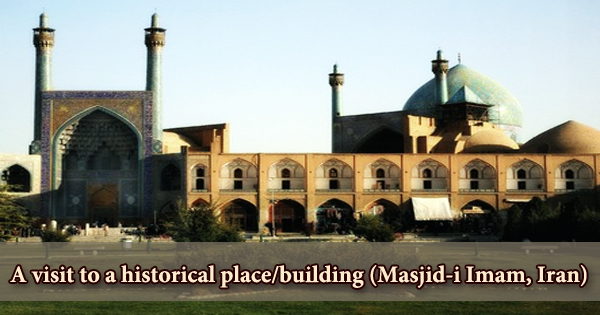 The Masjid-i Imam, originally known as Masjid-i Shah (Shah Mosque; Persian: مسجد شاه), is a masterpiece of Persian architecture from the Islamic era. It is also known as Jame Abbasi Mosque, Masjid Soltani, and Royal Mosque. It is a mosque in Isfahan, Iran, that can be found on the south side of Naghsh-e Jahan Square. The mosque was constructed on the south side of Isfahan’s maydan, or royal square, which was constructed during Shah Abbas. In 1597, Abbas relocated the Safavid dynasty’s capital to Isfahan with the purpose of concentrating political, religious, economic, and cultural activity, moving Isfahan’s center away from the region surrounding the ancient Friday mosque in the north and closer to the Zayandeh River. It is also the most important showcase of Persian architecture throughout the Islamic era in terms of architecture. In terms of architecture, tiling, and carpentry, this edifice is an enduring masterpiece. Shah Mosque was designated as one of Iran’s National Monuments in 1931. Along with Naqsh-e-Jahan Square, it was designated as a UNESCO World Heritage Site. Its construction began in 1611, and the elegance of its seven-color mosaic tiles and calligraphic inscriptions contribute to its opulence. On the back of the Iranian 20,000 rial notes is a depiction of the mosque. The enormous portal iwan on the northern arcade of the maydan, which connects the maydan to the ancient bazaar to the north, stands precisely opposite the mosque’s portal iwan. Isfahan’s Imam Mosque is one of Iran’s timeless architectural marvels. The Masjid-i Shah began construction in 1611 under Shah ‘Abbas and was finished about 1630 by Shah Safi, ‘Abbas’s successor, who reigned from 1629 to 1642. Shah Abbas hoped that by constructing this mosque, he would be able to lay his ancestor’s spirit, Shah Tahmasb, to rest in peace. Marble dadoes were added to the building in 1638. The inscriptions on the edifice name Badi’ al-Zaman Tuni as responsible for the building designs and site layout, ‘Ali Akbar Isfahani as the engineer, and Muhibb ‘Ali Beg as the general contractor, revealing a lot about the persons engaged in the mosque’s construction.

The Imam Mosque is made up of two structures: a beautiful entry gate with two minarets and the mosque’s main edifice with a large dome and minarets. Between them is the mosque yard. The entryway is designed in the shape of an iwan vaulted structure, which is a distinctive characteristic of Seljuk and Safavid Islamic architecture. The primary doorway to the mosque is placed on the vestibule’s southern wall, and one enters the mosque through a recessed vestibule from the middle of the maydan’s southern wall. This region links to the Maydan’s corridor, which runs behind its mercantile facilities, on both sides (east and west). The vestibule is the only part of the building that follows the maydan’s orientation (north-south). The rest of the mosque, which is rectangular in design (100 by 130 meters), is rotated 45 degrees to face Mecca, where the qibla wall is erected. The main doorway is connected to a triangular vestibule, which connects it to the mosque’s courtyard via the area behind the northeast iwan, in order to accomplish this orientation toward Mecca. The minaret is a distinguishing element of any mosque, and the Masjed-e Shah features four of them. Tall minarets were still considered inadequate for the call to prayer in Persian mosques, so they would add an aedicule, known in Persian as a goldast (bouquet), which sits on top of the west iwan of the Masjed-e Shah. The mosque’s acoustic characteristics make it a one-of-a-kind architectural element. Everyone speaking beneath the dome will be heard loud and clear by anyone inside. The mosque’s hallmark is the range of blue colors used in the interior and external tiled walls. On the southern wall, the mihrab, a massive marble tablet ten feet tall and three feet broad, showed the direction of Mecca. A gold-encrusted allow wood cabinet had been erected over it by the Shah’s soldiers. The domed sanctuary behind the southwest iwan is flanked by rectangular chambers (36 meters by 18 meters each) that serve as winter prayer halls and are accessed from the northeast-southwest axis of the domed sanctuary. These halls are encircled by eight domes and link to two rectangular arcaded madrasas (each 22 by 44 meters) that are likewise positioned on the northeast-southwest axis and can only be entered from the domed chambers behind the southeast and northwest iwans, respectively. The iwan looking east from the main courtyard housed a religious school, or madrasa. It has an inscription honoring the Fourteen Immaculate Ones written by calligrapher Muhammad Riza Imami. Visitors will notice a stone that does not match the stone surrounding it under the central dome, directly in the centre. The Shah Mosque’s acoustic point is marked by this stone. From here, the sound reverberates throughout the mosque, allowing the imam to talk at a lower volume while still being heard by everyone. An inscription band in white on a blue backdrop runs across the top of its upper zone, indicating the start of three tiers of muqanas units, each unit defined with yellow lines and inscribing a flowery arabesque mostly in blue. The Masjed-e Shah was a massive edifice that cost the Shah 60,000 tomans to construct and was reported to have 18 million bricks and 475,000 tiles. The inside of the dome has a sunburst at the peak from which levels of arabesque fall. Mosaic tilework of concentric medallions in floral themes adorns the eight domes in each of the prayer rooms next to the domed sanctuary. The mosque’s port is 27 meters (89 feet) tall, with two 42-meter (138-foot) tall minarets. There are four iwans and arcades surrounding the Mosque. Seven-color mosaic tile is used to decorate all of the walls. The mosque’s most impressive iwan is the one facing the Qibla, which is 33 meters (108 feet) tall. Above a continuous marble dado, the mosque’s interior and exterior walls are completely covered with a polychrome, primarily dark blue, glazed tile revetment. The entire structure is 100 by 130 meters (330 feet by 430 feet), with the central courtyard measuring 70 by 70 meters (230 feet by 230 feet). In the 1930s, the revetment that remained in place was used to replace the majority of the tile work. Water plays a significant role in the architecture, with ponds in the heart of both the main court and the madrasa courts, reflecting the Masjid-i Shah’s architectural magnificence.